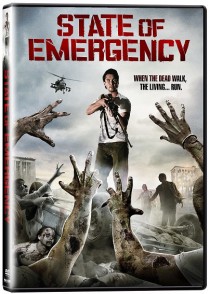 Image Entertainment is about to unleash the zombie thriller State of Emergency on DVD and Digital Download starting April 16th. Walking Dead fans will appreciate the Turner Clay horror, which centers on how life in a small town is changed forever after a bio-plant.

To celebrate the release of State of Emergency, Image Entertainment has provided Film Fetish with 3 copies of the DVD version of the film, for our readers. In order to have a shot at winning a free copy of State of Emergency, just make sure you have “LIKED” us on Facebook and “Follow Us” on Twitter. If you do both, you’re automatically on the list for a possible prize! We’ll be running State of Emergency contest through Friday, May 3rd, 2013.

More about State of Emergency

A bio-plant explosion will forever change the dynamic of a small country town. A man will be forced to kill those very people he once held dear. On April 16th, Image Entertainment challenges you to escape zombie-ridden Montgomery County with the release of State of Emergency. This harrowing tale of survival amongst the undead is directed by Turner Clay (Interception) and stars Jay Hayden (A Warrior’s Heart), Tori White (Silent Night) and Andy Stahl (The Blind Side).

After an explosion unleashes the contents of a military bio-weapons plant, the unsuspecting populace is transformed into a roaming army of flesh-eating zombies. Trapped in the quarantine zone, Jim finds himself cut off, confused and fighting for his own survival. Contacted by a small band of others unaffected by the toxins, Jim sets out to reach their besieged warehouse. Becoming the survival group’s de-facto leader, he struggles to keep order as they hunker down, fortify their stronghold and arm themselves against the attacking mutants. Fragmentary radio reports from outside hint at a last-ditch government rescue plan.

But can the survivors hold out until help arrives… or will they succumb to the living hell of an undead apocalypse? Will anybody survive?

Check out the trailer and images from State of Emergency, below.