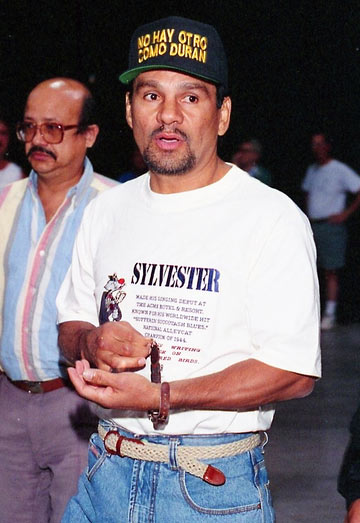 Deadline reports that Robert De Niro and Edgar Ramirez have agreed to star in a biopic on Roberto Duran called Hands Of Stone, slated to be written and directed by Jonathan Jakubowicz. Ramirez will play boxing champion Roberto Duran, with De Niro playing his trainer Ray Arcel in a drama that focuses on how each man changed the life of the other. According to the report, Hands Of Stone is set during boxing’s Golden Era, when Duran practiced his craft amongst legendary fighters including Sugar Ray Leonard, Thomas Hearns, Marvin Hagler, Hector Camacho and Vinny Pazienza.

The focus of the film will be on the Panamanian boxer’s incredible brawls with Leonard, culminating in an inexplicable ending of the famous fight where Duran quit in the ring and cried “No mas,” on a night when Leonard was having his way. The film will begin production this September in Panama, with Jay Weisleder and Jakubowicz acting as producers, and Roberto Duran’s son, Robin Duran serving as Associate Producer.