Unlike the ‘Deluxe’ Edition DVD that was released in February of this year, the Blu-ray version of Friday the 13th Part 3 includes a very nice portion of bonus material, including Part 3 of Lost Tales From Camp Blood, a continuation of the short film series from Parts 1 and 2 on disc.

Paramount Home Entertainment is set to release Friday the 13th Part 3 on Blu-ray – in 3D – for the first time in the U.S. While the third in the series of Jason movies starts to show it’s cracks, it’s still reminiscent of a time when slasher films were a fun diversion to explore with friends on a Saturday night.

Part Three is also a significant film in the evolution of the series in two ways:

As with all of the early Friday the 13th movies, there’s some unique kills that occur, making the film more than just watchable, but enjoyable in a twisted way. By this point in the series, most people were taking bets as to how Jason’s victims would get theirs. 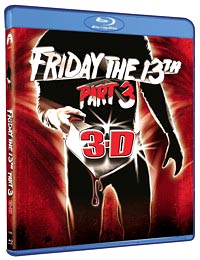 The storyline of part 3 is typical – another group of naive counselors choose to ignore Camp Crystal Lake’s gruesome legacy. Then find themselves in a bloody game of cat-and-mouse with the maniacal Jason who stalks their every move, and ruthlessly offs them off one-by-one, in creative ways actually – at least creative for a maniac killer. Jason also goes postal on a motorcycle gang that dares to cause trouble for the same counselors he’s trying to dismember.

The disc marks the first time this blood-splattered romp in the woods can be watched in all its gory 3-D splendor on Blu-ray. As with the DVD edition, it comes with 2 pairs of 3-D glasses for the optimal viewing experience, plus there’s a 2-D version of the film as well. Again, it was nice having the option to switch back and forth, in some cases just for fun.

Bonus Material
As I said, this Blu-ray presentation contains a nice helping of extras, which are all presented in high definition.
Fresh Cuts: 3D Terror (Presented in HD) features Larry Zerner giving an entertaining peek behind the scenes of the difficult film shoot.
Legacy of the Mask (Presented in HD) is devoted to the hockey mask of the series. This was one of the most fun extras for me, as it delves into the cult fascination with the iconic symbol.
Slasher Films: Going for the Jugular (Presented in HD) is a light history of slasher films and their effects on the medium.
Lost Tales from Camp Blood – Part 3 (Presented in HD) is the previously mentioned chapter in the series of loosely connected, fan-made shorts that pay tribute to the franchise.
The original theatrical trailer is also included (Presented in HD), which wraps up the bonus material.