On June 16th, 2009, Paramount Home Entertainment will release Friday the 13th Part 2 on Blu-ray. While the release of Part 2 on Blu-ray, contain the same extra features as the recent Deluxe DVD edition, the Blu-ray format marks a clear upgrade in entertainment value for the film.

Five years after the massacre at Camp Crystal Lake – now a condemned piece of property – the legend of Jason Vorhees and his diabolical mother lives on. Of course, despite ominous warnings from locals to stay away from “Camp Blood”, a group of counselors at another summer camp on the other side of the lake, decide to explore the area where seven people were brutally slaughtered. All too soon, they encounter horrors of their own and the killing begins again.

Friday the 13th Part 2 was watered down because of an MPAA revolt against slasher films, and while Jason’s kills are more inventive, they seem tame in comparison to its predecessor.

However in the Friday the 13th history, this first sequel is extremely important. It gave the world an enormous, powerful and crazed murderer, obsessed with getting revenge on humanity for the death of his mother.

The bonus materials are the real jewels here, especially if you’re a hardcore fan of the series. 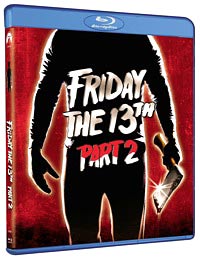 Inside Crystal Lake Memories (presented in HD) features a conversation between Del Howison – who owns the horror memorabilia store Dark Delicacies – and Peter Bracke, the author of Crystal Lake Memories. They discuss how the book came to be in this interesting 10 minute conversation. Bracke also gives some details about what’s inside the volume.
Friday’s Legacy: Horror Conventions (presented in HD) was shot at the 2008 Scare Fest in Lexington, KY, and features a look at classic Friday the 13th stars at the convention as they meet with fans, signing autographs, answer questions and attend film screenings. This was lots of fun for me to watch, as I am a huge fan of comic and horror conventions.
Lost Tales from Camp Blood – Part 2 (presented in HD) is a short film follow up to the one included on the Part 1 DVD and Blu-ray. It features a couple hiking through the countryside after their car breaks down, who are stalked by a Jason-like hooded killer. It’s a well-made short, and a nice change of pace from standard featurettes.
Jason Forever features a panel from a 2004 Fangoria convention, with four actors who have played Jason Voorhees. The panel is moderated by author Peter Bracke and includes Ari Lehman (from Part 1), Warrington Gillette (from Part 2), CJ Graham (from part VI), and Kane Hodder (from parts VII, VIII, IX and X). It’s a very interesting conversation on how they became involved with the series and where their careers have gone since.
The special features are topped off with the original theatrical trailer from the film (presented in HD).

If you already purchased the Deluxe DVD edition that was recently released, I would only recommend this disc for hardcore fans of the franchise and true slasher film fans.