Shot on location in Cambodia, including many scenes in actual brothels in the notorious red light district of Phnom Penh, Holly succeeds in its efforts to stir sufficient emotion to make the viewer ask questions about the inhuman, and sometime brutal world of sex-trafficking. The issue has become a hot topic in the past few years, and the film adds to the conversation. Sex-trafficking recently topped the U.N. human trafficking list as the most common form of trafficking today.

Holly is a riveting account of one man’s (Ron Livingston) efforts to save a Vietnamese girl (Thuy Nguyen) from a desperate life of sevitude and human bondage, and in turn redeem himself, after years of selfish living and selective blindness to his surroundings. It moves on both fronts; as a call to join efforts to curb this growing practice; and as a piece of dramatic entertainment. 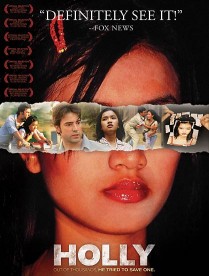 Livingston plays an American expatriate named Patrick – a card shark and stolen artifacts dealer that has been living in Cambodia for 15 years. He encounters 12-year-old Holly (Nguyen), in the K11 red light village (called K11 for being 11 kilometers from Phnom Penh), after his boss, a smuggler named Freddie (Chris Penn in his last onscreen performance), sends him on a job, and his motorcycle breaks down. The girl has been sold by her impoverished family and smuggled across the border to work as a prostitute.

The documentary-style street scenes and muddy, swamp-like landscape shots of Cambodia – one of the world’s poorest countries – add instant depth and reason to the story and tone. Cambodia has apparently gained a sordid reputation as a destination for pedophiles and men looking for sex with young girls. Holly’s virginity makes her a lucrative prize, and when she is sold to a vicious child sex ring, Livingston embarks on a frantic search through both faces of the country, in an attempt to bring her to safety.

Holly is played by the talented Thuy Nguyen, who conveys a believable venerability, that seeds into Livingston’s character, which grows a new-found humanity that feeds his search. Livingston, who usually plays lighter characters, transforms into a dark, self-centered trickster, with mixed results. While he is believably tender in certain scenes, It’s hard to fathom how he’s been in Cambodia for that long, and hasn’t heard about underage prostitution – even after his stated explanation. Udo Kier plays a sex-tourist looking for underage girls, and Virgine Ledoyen plays a child-advocate who gives Patrick the stattistics on the growing problem in Cambodia. Both supporting roles are satisfying, and help steer the story along.

The feature is part of the K-11 Project, which is dedicated to raising awareness of the epidemic of child trafficking and the sex slavery trade through a number of film projects. The film’s producers endured substantial hardships in order to be able to shoot in Cambodia and founded the RedLight Children Campaign, which is a worldwide grassroots initiative generating conscious concern and inspiring immediate action against child sexploitation.

Below are some of the production notes from Holly, which give more background on the motivations for this film and the entire project.

Holly was shot entirely on location in Cambodia, many scenes in actual brothels, most notably in the village of Svay Pak (Phnom Penh’s red light district).

The infamous Svay Pak, otherwise known as K11, was for years the premiere destination of child molesters and sex tourists coming to Cambodia. Both foreigners and locals would come by the thousands to prey on children, some as young as five years old, for a price as low as five U.S. dollars.

This village was fully operative up until 2004, prior to the commencement of principal photography, when it was finally closed down due to international pressure (the girls themselves were simply trafficked to a different area). Both the cast and crew worked under heavy guard to capture the harrowing images of this infamous meat market (still owned by the Vietnamese mafia). The film also features the town of Batambang and a true “tour” of all the shadiest brothels in it, and the actual AFESIP NGO shelter, the region’s leading organization fighting against the trafficking of women and children. The shooting style is at once choreographed and documentary-style, both in stock choice and its hand held camera approach, attempting to simultaneously convey both immediacy and poetic commentary.

Joining the star-studded international cast were many non-actor locals The real languages were kept for authenticity; the film is in Vietnamese, Khmer, and English.

A percentage of all proceeds from the DVD goes to the Redlight Children Campaign, which you can find out more about at www.redlightchildren.org.