Ong Bak and and Tom yum goong director Prachya Pinkaew, successfully adds another notch to his action genre belt to the with the kinetic film Chocolate, this time with a female protagonist played by the director’s new protégé, Jija Yanin Vismistananda, a charming newcomer who spent five years training for the role.

Fans will not be disappointed with this 90 minute ride of incredibly choreographed martial arts action, that pits Vismistananda against underworld thugs, gangsters and myriad assassins.

Chocolate opens with a standoff between a Thai gang and a Yakuza group that’s trying to add to their territory in the city. Thank to a stunning, kick-ass woman named Zin, an uneasy peace is made between the two gangs. The head of the yakuza, Masashi, becomes infatuated with Zin and they begin a steamy affair that comes to an abrupt end when Masashi becomes the target of the Thai gang. Zin protects him, but is expelled from the gang and winds up pregnant by Masashi, who soon returns to Japan for his own protection. 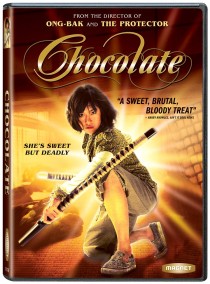 Vismistananda plays Zin’s child Zen, who’s quiet and distant, and whom her mother soon learns is autistic. Zen grows up next to a Muay Thai boxing studio and is raised on a steady diet of chocolate and marathon viewings of Tony Jaa and Bruce Lee films. The child slowly absorbs formidable Muay Thai techniques from watching the boxers practice, along with repeated viewings of the classic martial arts films.

After having a run in with her old gang, which costs her a big toe, her mother Zin decides to move the family to a run down home where she attempts to live in peace. However, she becomes afflicted with cancer and the livelihoods of herself and her daughter are put in danger.

In order to make ends meet, Zen and her cousin Moom begin to put on shows in which he chucks balls at her as well as the audience. With her senses honed from her autistism, she is able to catch the balls easily. However, one day a group of toughs throw a knife at her which she also catches, slicing her hand in the process. However, she soon reduces them to mounds of whimpering pain, finally realizing her skills as a martial artist.

As Zin’s condition becomes more dire, Moom finds a book of people who owe Zin money. Zen – understanding that her mom needs money to stay in the hospital – sets out with her cousin on a violent mission to collect debts from the corrupt gangsters that owe her mother money. However, her activities soon draw attention from Zin’s former gang, and she’ll have to kick all kinds of ass in order to protect her family.

If you’re coming to watch a film with an intricately woven plot, you’re watching the wrong movie. If you’re looking to see Yanin Vismistananda kick gangster butt with astounding setups from action supervisor Panna Rittikrai and martial arts choreographers’ Weerapon Phumatfon and Thaworn Thonapan, you’re watching THE film. After the plot is established, Chocolate becomes a nonstop action sequence with the near invincible Zen beating up ice factory workers, butchers, and gangsters.

Leaning heavily on its influences, including Kill Bill, Zatoichi, and Bruce Lee’s Hong Kong films, Chocolate packs some of the most fun thrills I’ve seen from straight up martial arts cinema, in some time. The film is a worthy follow-up to Prachya’s previous efforts and a must-see for action junkies and fans of the genre.

Below is a promo reel that highlights a bunch of other kick ass Magnet releases currently available.