The Boondock Saints follows religious Irish brothers Connor and Murphy MacManus – played by Sean Patrick Flanery and Norman Reedus – who grab Boston by the balls as vigilantes out to eliminate evildoers. It all starts after they kill a Russian mobster in self-defense, and decide that they have found their calling from God – to rid the earth of what they feel are human scum. So they set out to complete their divine mission by taking out gangsters, criminals and general low-lifes. As the body count begins to rise, the brothers become local heroes. Meanwhile, a gay FBI agent – played by Willem Dafoe, in an incredible performance – is hot on the duos’ trail, while the boys are also hunted by an eccentric crime lord played by Billy Connolly. 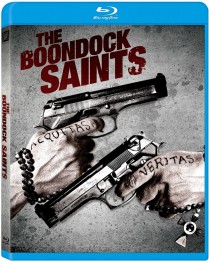 The Boondock Saints became an instant cult crime classic, when it was released in 1999, primarily because of its brutal violence, which at times, is not necessary to push the story forward. While the McManus brothers are somewhat captivating on screen, and we can sympathize with their efforts, they seem to lack the cunning and depth to get me to fully cheer their attempts.

The brothers are joined by their overly enthusiastic friend and mob runner Rocco (David Della Rocco). The three start their “crusade” by eliminating a group of Russian mobsters who attempt to close down their favorite hangout. They then work their way up through the ranks of the Italian mafia. Although society views them as Saints whose actions should be praised, in comes Smecker (Dafoe) who vows to stop at nothing to bring the vigilantism to a stop, despite his own inner sympathies with their cause. Dafoe, who is incredible, at one point while working a crime scene, plugs in his headphones and plays classical music while dancing through his detective work routine, giving viewers a memorable rendition of River Dance.

While Boondock Saints scores on some levels, it’s filled with enough flaws to temper any great excitement for the impending sequel, which was recently announce.

Bonus Features
The Boondock Saints Blu-ray release is presented in widescreen format with English 5.1 DTS HD Master Audio and includes English, French and Spanish subtitles. The bonus features include Outtakes from the shooting of the film, which helps to temper the violence that ends up onscreen. There are Seven Deleted Scenes from the film, which help to expand on the characters’ development and motivations. Both the Director’s and the Theatrical Cut of the film are included on the disc. I preferred the director’s cut of the film, which probably wasn’t subject to as much interference from the studio or ratings board.

The bonus features are rounded out with the Theatrical Trailer, Filmographies of the filmmakers and the actors in the film, and Audio Commentaries by writer/director Troy Duffy and actor Billy Connolly.