Buena Vista Home Entertainment released the romance comedy classic Pretty Woman on Blu-ray disc for the first time on February 10, 2009. The feel-good modern spin on the Cinderella tale stars Academy Award winner Julia Roberts as Vivian – a spirited, streetwise prostitute, who has a chance meeting with a a dapper, no-nonsense socialite billionaire named Edward – played by Golden Globe winner Richard Gere. It’s a chance encounter that begins as a weeklong business arrangement, and turns into a timeless rags-to-riches romance, after Edward hires Vivian to “accompany” him to a number of upcoming events and ultimately falls in love with her earthy charm and charisma. 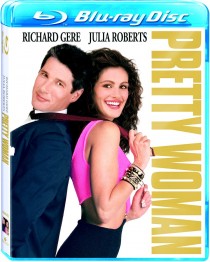 Aside from a steady vision from director Garry Marshall, the on-screen chemistry between Roberts and Gere almost entirely carries the film home. Add strong supporting performances by a snobby Jason Alexander, who’s hell-bent on breaking up the high roller and call girl, and the classy hotel manager played by Hector Elizondo, who teaches Vivian how to hang with the upper crust, and it’s no wonder why Pretty Woman has become a classic that has easily stood the test of time.

Pretty Woman moves with such style and grace you don’t notice how implausibly it all fits together. But everyone from the director, to the writer, to the cast, pull it off effortlessly, making for an entertaining gem that can watched over and over again.

Bonus Features
The Pretty Woman Blu-ray release is filled with solid bonus features, although nothing is new, and all are in standard-def quality, making their flaws more noticeable in the HD format. They include: