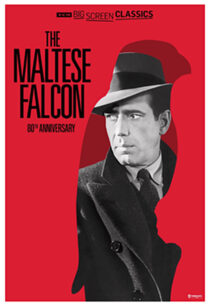 John Huston’s 1941 film features an all-star cast, was nominated for three Oscars, and has been listed in AFI’S 100 Years…100 Movies 100 Greatest American Films Of All Time. It will be presented with pristine digital projection, movie-theater-quality sound, and in its original aspect ratio. The TCM Big Screen Classics series is further enhanced with fascinating pre- and post-feature insights presented by TCM hosts.

In the film, Academy Award winner Humphrey Bogart stars as tough private detective Sam Spade in the classic story of Spade’s involvement with a deadly band of international thieves who will lie, doublecross and murder to obtain a small, jewel-encrusted statue known as The Maltese Falcon.

Film aficionados can enjoy a yearlong journey spanning nine decades of cinema history, through a dozen of some of the movie industry’s greatest titles, as Fathom Events and Turner Classic Movies present the seventh annual TCM Big Screen Classics series. Featuring acclaimed films released from 1941 to 1996, and encompassing legendary dramas, iconic musicals, beloved comedies, a thrilling adventure, a stylish film noir, a stirring epic, a crackling mystery, and a suspenseful horror, the TCM Big Screen Classics series has something for everyone in 2021.

Each film is presented with pristine digital projection, movie-theater-quality sound, and in its original aspect ratio, as they were intended by the filmmakers. The TCM Big Screen Classics series is further enhanced with fascinating pre- and post-feature insights presented by popular TCM hosts, including TCM Primetime host Ben Mankiewicz.

The lineup for the 2021 TCM Big Screen Classics series is:

Since its start in 2015, the TCM Big Screen Classics series has proved to be an annual fan favorite. Many events in the series achieved rave reviews and were top performers at the box office.

Tickets for The Maltese Falcon 80th Anniversary are currently available at FathomEvents.com or at participating theater box offices. For a complete list of events in the series, visit the Fathom Events website. Tickets for other titles in the series will be available closer to their event dates.