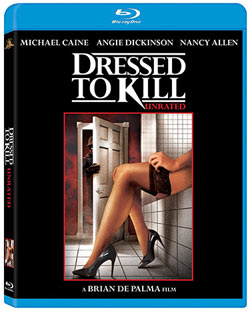 On September 6th, Fox and MGM released the classic suspense thriller on Blu-ray for the first time ever. Twentieth Century Fox Home Entertainment has released Brian De Palma’s timeless MGM classic Dressed to Kill on Blu-ray, recalling the hazy days when studios released films that had true sexual and moral tension, a by-product of the grindhouse movement started in the early 1970’s. The film is a dark, psychological crime thriller with twists and turns, that never gives you what you expect, but delivers throughout.

Angie Dickinson plays Kate Miller, a sexually-repressed housewife who seeks treatment from Oscar-winner Michael Caine’s Dr. Robert Elliott. While secretly leaving a hotel after a one-night affair, Kate is mysteriously murdered by a tall blonde woman wearing sunglasses. The only witness is a high-priced call girl played by Nancy Allen, who soon becomes the killer’s next target. With the help of Kate’s grown son, Peter (Keith Gordon, A Midnight Clear), Liz discovers that the murderer is connected to Dr. Elliott, and the pair come face-to-face with a shocking surprise.

This high definition release is consistent and impressive, while maintaining the rich grainy texture of the original film print. That should make classic film fans happy. The audio track is equally impactful, making for an overall high quality presentation.

Check out clips from Dressed to Kill below.

Dressed to Kill – Film Clip: “I Shouldn’t Have Been So Rude”