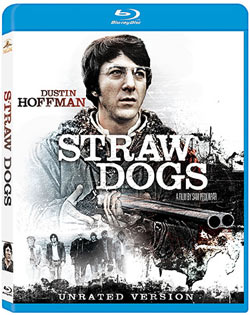 Sam Peckinpah’s 1971 classic Straw Dogs is a violent film that retains its power to shock audiences even today. One of the grittiest and controversial thrillers of all-time, the film was banned in the United Kingdom for over 18 years. It’s the story of a pacifist mathematician named David (Dustin Hoffman), a self-absorbed American intellectual who, partly in reaction to the Vietnam War, retreats to his young wife Amy’s (Susan George) native village in Cornwall, England, to do research.

Amy insists that David attempt to involve himself in the life of her community, however, he can’t seem to fit in, who sense his arrogance and condescension. Terrible events follow, beginning with the killing of a family pet. By the end of the film, David emerges as a man capable not only of committing violence but enjoying it. This Blu-ray is being released in celebration of the film’s 40th Anniversary and in anticipation of the theatrical remake, but nothing can compare to the masterful original.

Visually, the original aspect ratio is gracefully expanded into high-definition, bringing with it a brilliant sense of color and depth. The audio mix was handled with great care for this release, turning the original mono soundtrack, into a stereo equivalent, and Jerry Fielding’s score resonates well through it all.

Below are clips from the Straw Dogs Blu-ray release.

Straw Dogs – Film Clip: “I’ll Give You One More Chance”

Straw Dogs – Film Clip: “I Thought They Put Him Away”

Straw Dogs – Film Clip: “I Will Not Allow Violence Against This House”