Back in July while attending San Diego Comic-Con, I decided to take my family to the San Diego Zoo for a break from the massive crowds and comic-addled panels that were drenching my brain. While visiting the Polar Bear enclosure, I somehow managed to capture video of the most amazing bear-human interaction I had ever seen in person. A little girl who happened to also be visiting at the time, placed a polar bear doll up to the glass-enclosed pool and the playful real-life equivalent began performing the most graceful underwater ballet I’d ever seen (SEE IT HERE). He was clearly trying to impress his new feather-filled friend. 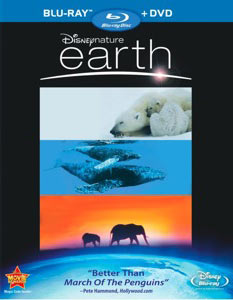 As amazing as that was to watch, it was nothing compared to when I originally saw the documentary Earth in theaters, and the astounding sense of awe I felt viewing these beautiful creatures in a completely uninhibited, unprotected and sometimes dangerous environment. It made my real-life experience seem somewhat pedestrian by comparison.

Pieced together from used and B-roll footage originally shot for the acclaimed BBC documentary series Planet Earth, Disney’s first DisneyNature production has been rightfully hailed as a brilliant cinematic journey into the lives of three animal families, including a polar bear and her cubs, a herd of elephants, as well as a humpback whale and her calf. It’s interesting that such powerful and massive beasts were selected as the focal points of the movie, out of so many potential animal groups, but the choices seem perfect after watching the personable nature, mature temperaments and thrilling narrative that’s weaved between them. Especially after witnessing the reactions on kid’s faces in the audience, who refused to look away from the screen, even at the promise of massive buckets of popcorn and Sweet Tarts from parents.

Each animal family is invariably faced with the drama of their own unique challenges: The polar bears must deal with a devastating lack of food, as well as other natural dangers; the elephants must brave a colossal dust storm and attempt to survive a night with a hungry pride of vicious lions, with penetratingly glowing eyes; and finally the whales take a dangerous journey to the frigid waters off Antarctica. Throughout each individual pilgrimage, a multifaceted assortment of earth’s creatures appear, including cheetahs, mandarin ducklings, gazelle, great white sharks,walruses, dolphins, arctic wolves and many more.

And it’s an experience that must be watched in the Blu-ray format, if at all possible. The stunning HD cinematography makes this journey all the more palpable.

Earth is a truly inspiring story that does more than teach about the natural cycle of life in the world – it entertains and makes you laugh, cry and feel fear, right along with its subjects.