I have another great contest this week. Next Tuesday, April 21st, Cinevolve Studios invite home viewers to go deep inside the weird, wonderful universe of the Star Wars phenomenon, when they release the 10th Anniversary Collector’s Edition DVD of the documentary A Galaxy Far Far Away. Created in 1999 by director Tariq Jalil, the film explores the cross-generational phenomenon that is Star Wars, by focusing the camera on the fans and the franchise like no one had previously done.

To celebrate the release, FilmFetish is getting five copies of this historic and very collectible release for readers to enjoy.

In order to be entered in the random drawing for your FREE copy of A Galaxy Far Far Away, here’s what you need to do:

I’ll be running this contest through the DVD’s release date of Tuesday, April 21, 2009. Good luck!

Below is a trailer for A Galaxy Far Far Away.

More about the documentary:
A little over three decades ago, Star Wars – the first entry in an epic franchise envisioned by George Lucas – premiered at Mann’s Chinese Theater in Los Angeles. Few could have imagined the long-lasting impact it would have on worldwide pop culture that exists to this day. As of 2008, the six films alone have generated over $4.3 billion, making Star Wars one of the most successful franchises in entertainment history. Add to that the countless thousands of licensed products, and you have a powerful phenomenon that has captivated millions across the globe. And that’s only part of the story. 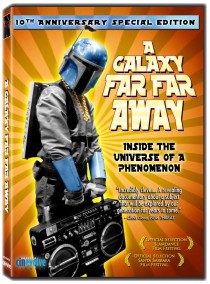 In 1999, as fanatics eagerly anticipated the release of Episode I, The Phantom Menace, director Tariq Jalil decided to explore this cross-generational phenomenon, so he turned his camera on the fans and the franchise like never before. Called “incredibly clever” by Film Threat, A Galaxy Far Far Away shed light, for the first time into how Star Wars struck such a mysterious and powerful chord across all races, genders, and generations. And this March, Cinevolve Studios commemorates this crowd-pleasing documentary with A Galaxy Far Far Away: 10th Anniversary Collector’s Edition.

Featuring interviews with hundreds of fans, movie executives, and high profile celebrities, A Galaxy Far Far Away delves into the franchise that has made household names of Luke Skywalker, Han Solo, R2-D2 and C3PO. As a new wave of Star Wars mania was being induced in ‘99, Jalal brought his cameras to Star Wars conventions, to boisterous nationwide premieres, into the homes of devoted fans showing off their treasures and collectibles and captured those who spent 42 days on line, just to be first to see The Phantom Menace. Interviews and archival footage featured includes Samuel L. Jackson, Joe Pesci, genre filmmaker Roger Corman, Meat Loaf, Dennis Franz, Andy Garcia, Jimmy Kimmel and Star Wars alumnus David Prowse (Darth Vader), Kenny Baker (R2-D2), Anthony Daniels (C3-PO) and Peter Mayhew (Chewbacca). Offering a complete, often hilarious, exploration of George Lucas’ crowning achievement that brings together a group of fascinating, passionate, hysterical – and often touching – fans, A Galaxy Far Far Away is not just a film about overzealous fanboys. Instead, it plumbs the depths of a common, shared love that knows no boundaries and seeks answers to a stunning phenomenon that continues to live on like Yoda.