Primal Fear is a twisting courtroom thriller based on the first of a series of novels written by William Diehl, featuring the character Martin Vail. It’s the story of a high-profile slaying that becomes the case of the ambitious Vail (played by Richard Gere), a famous defense lawyer who volunteers his services to Aaron Stampler (Edward Norton), a Kentucky teenager charged with the murder of a well-known and beloved Chicago archbishop. 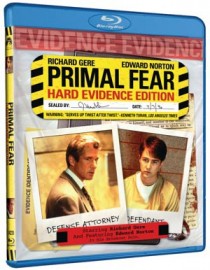 Covered with blood, Aaron was captured after a foot chase that was broadcast live on television, making Vail – who seeks media attention more than justice – certain that he can raise his profile by defending a suspect that will have obvious problems getting a jury to hear his side of the case. Janet Venable (Laura Linney) is the prosecutor assigned to the case, and she’s under enormous pressure by her superiors, to bring home a guilty verdict and the death penalty. The case becomes even more complicated when a psychologist, Dr. Molly Arrington (played by Frances McDormand), concludes that Stampler suffers from multiple personality disorder. Vail also uncovers evidence that the archbishop was involved in a corrupt land deal and was sexually abusing alter boys at the parish.

Primal Fear was an all-around enjoyable drama, with enough exciting twists and turns to keep viewers interested, accompanied by solid writing that brings a number of complicated and delicate elements together in gripping fashion. The strong ensemble cast flex enough acting muscle to power home a thrilling film, with an ending that, while not the most believable, packs a sucker-punch.

Bonus Features
The Hard Evidence Edition comes with several new features, including a commentary track with director Gregory Hoblit – who’s movies I seem to enjoy more than most for some reason; co-writer Ann Biderman; producer Gary Lucchesi; executive producer Hawk Koch; and casting director Deborah Aquila. The commentary is entertaining and informative. It gives the viewer a good understanding of the background of the project and the process of making the film. The featurette Primal Fear: The Final Verdict contains interviews with key cast members involved with the project including Ed Norton and Laura Linney. Another featurette titled Primal Fear: Star Witness contains interviews focusing on the casting of Norton to the role of Aaron Stampler. The Psychology of Guilt featurette is a primer on the insanity defense, and its place in the American legal system, as well as how multiple personality disorder affects people. This was probably the most interesting of the extra features on the disc.

The original theatrical trailer is presented in hi-def to round out the bonus features. I’ll just add that one of the best aspects of this hi-def transfer is James Newton Howard’s score, which sounds amazing in the format. The picture and color is also crisp, and looks stunning.