Marc Forster’s visceral adaptation of Khaled Hosseini’s bestseller The Kite Runner, succeeds at tracing massive political and social changes in the country of Afghanistan, while remaining tightly focused on a group of people whose lives are forever altered by the tumultuous changes. The film follows the life of Amir, a spoiled young Afghani from a respected Kabul family. In the mid-1970s, young Amir (Zekiria Ebrahimi) lives with his prosperous father in a comfortable home. His best friend is the fiercely loyal Hassan (Ahmad Khan Mahmoodzada), son of the family’s head servant. Hassan will do almost anything for Amir, who sees the line of class and money that separates them much more clearly than Hassan, who is blind to it, valuing only friendship. 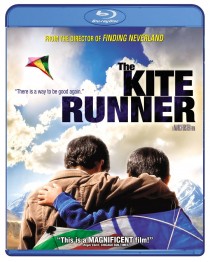 Amir’s father is a proud and educated man, with modern music, nice clothes, liquor and an American Mustang automobile, which is especially beloved by Amir and Hassan, who both admire Steve McQueen.

Amir and Hassan love kite flying, an Afghan past-time where pairs of boys get into high-altitude duels, and attempt to sabotage their opponents kites by cutting the strings. At Kabul’s large kite flying contest, groups of boys stand in available spaces amidst crowds and on rooftops to find flying space, holding their spool in one hand and working the string with the other. It was an important coming of age sport, that was later banned when the Taliban seized control of the country.

The two boy’s bond of friendship ends tragically during the contest, which Amir and Hassan have prepared meticulously for together, after Amir cuts another boy’s kite and Hassan runs off to get it back for him. When Hassan doesn’t return, Amir goes looking for him, and sees Hassan being bullied by a group of older boys trying to steal their prize kite. Hassan refuses and takes a savage beating that will change both boy’s lives forever. Amir watches, but has too much fear in his heart to help – so he pretends he doesn’t see it to save face.

Their friendship is carried away with the kites on that day, with Hassan’s eyes being opened to the selfish side of Amir he refused to see before. Soon after the incident, the Russians invade the country and Amir and his father escape to the United States in search of a new life.

Years later, Amir has grown, and becomes an accomplished author in San Francisco. However, he still carries incredible guilt with him surrounding that day. After word comes from Afghanistan that his father’s close friend is very ill, Amir sees an opportunity to set things right with his childhood friend.

The Kite Runner is a lovely film that spans multiple decades, revealing information about its characters, who had to endure a culture that had already been through such turmoil, then a major invasion and finally the Taliban’s theocratic rule.

Special Features
The Blu-ray includes a reasonable selection of behind-the-scenes content. The first is Words From the Kite Runner, which contains interviews with Marc Forster and author Khaled Hosseini, who discusses the genesis of the story, and how it is to his actual life. Next is Words and Images From the Kite Runner, which is a bit of “making of” piece, that turns out to be well worth watching. There’s also a commentary by Marc Forster, Khaled Hosseini and screenwriter David Benioff, as well as its trailer in HD.