Things We Lost in the Fire is first and foremost a beautiful character study, thanks to excellent performances by Oscar winners Halle Berry and Benicio Del Toro, who bring so much weight to their roles, it surprises me I watched this film for the first time for this review. Berry’s delicate performance as a grieving widow clinging to her dead husband’s best friend, hopefully proves once and for all that her Oscar win was not a mistake, and that she is one of the most talented and hard-working actresses working today, in addition to being one of the most beautiful women on the planet.

One can always expect a strong performance from Benicio Del Toro, and the talented thespian doesn’t disappoint here, playing a recovering drug addict whom Audrey Burke (Berry) doesn’t take to at first. In fact, her husband Brian’s (David Duchovny) support of Jerry Sunborne (Del Toro), is the only source of real tension in their marriage. Despite Audrey’s vehement disapproval, Brian still visits Jerry and brings him food, even after everyone else in Jerry’s life has abandoned him. 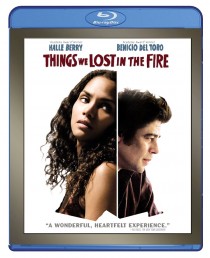 When Brian is tragically killed one night after attempting to intervene in a random domestic dispute, Audrey impulsively reaches out to Jerry, seeking to fill the painful void left by her husband’s death. She nervously invites the struggling co-dependent to move into the room adjacent to their garage, with hopes that he can help her and her children cope with their sudden and tragic loss. What starts as a desperate attempt for Audrey and Jerry to ease the great pain of their loss, turns into an uneasy bond as they begin to work through the grief, suffering and denial.

Danish director Susanne Bier – making her English language debut – digs deep enough into the film’s subject matter to unearth real emotion and substance, with a sensitive touch that brings the project together, but without the melo-drama sometimes associated with this type of story. The constantly moving and close-up shots make the audience see the grieving process, as well as believable intimacy between Brian and Audrey in flashbacks.

Berry has a unique ability to project the ultimate vulnerability in her roles (see Monster’s Ball), and as Audrey she hangs on to that moment of loss, and ultimately finds Del Toro as her only way to even continue on. David Duchovny is perfect here, as the loving husband and true friend, giving a smooth and toned performance as Berry’s husband. When you see the couple together through the grieving widow’s flashbacks, you feel her loss deeply as well.

Del Toro is brilliant as the tormented Jerry, who finds simple human contact confusing, yet who’s trying not to take advantage of horrible circumstance. As he rediscovers his own humanity, he stands by Audrey even through her bouts of unpredictable rage and misdirected anger.

Director Bier drifts in and out of dim recollections and unfinished conversations, seemingly attempting to make Audrey’s flashbacks just how a person would really remember someone and see things after such a loss. Audrey lingers on minor arguments left unresolved and passionate embraces that will never happen again – the heat of a life together that’s now cold.

Jerry also has his own found memories, particularly when he thinks of Brian’s kindness, wishing he had been more appreciative.

Things We Lost in the Fire is a well-told story of hope, renewal and finding the strength to let go, that relies on great and personal performances, and isn’t afraid to do so.

Blu-ray Extra Features:
The release is light on special features. It includes A Discussion About Things We Lost in the Fire, a commentary featurette on the making of he film. Bier, in particular, went into detail about working with the cast, and how the film developed from those relationships, which should be interesting for fans of the acting craft. There are also seven deleted scenes, which primarily give additional depth to the character’s individual stories. They include:

The extras are rounded out with the Theatrical Trailer in hi-def.