‘Miracle’ opens in the late 1980s, as aging New York postal clerk Hector Negron (Laz Alonso) pulls out a pistol and puts a bullet in the chest of what we think is a random customer. The senior detective at the scene (John Turturro) reluctantly points an aggressive cub reporter (Joseph Gordon-Levitt) toward Negron’s Harlem apartment, where clues to the man’s identity only deepen the mystery behind the crime. 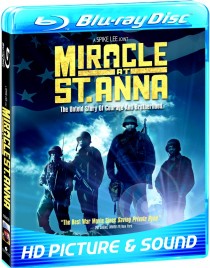 The murder serves as a gateway into an epic tale depicting the indomitable human spirit in the face of mutual fear and utter devastation.

The film is based on the highly acclaimed novel written by James McBride, that was itself loosely based on the true story of four African American soldiers stationed in German-occupied Italy during World War II.

Separated from their unit and trapped behind Nazi lines, ranking officer Aubrey Stamps (Derek Luke), forever-angry Cummings (Michael Ealy), radioman Negron (Laz Alonso) and gentle giant Train (Omar Benson Miller) survive a shocking massacre, rescuing a young Italian boy in the process. The five make their way to the nearest village, where they join forces with the local opposition and attempt to find their way home.

With recent efforts including Jim Brown: All American, Showtime’s Sucker Free City, 25th Hour, Inside Man, and now Miracle at St. Anna, Lee has taken the natural artistic ability and craftsmanship honed in his earlier work, and is starting to hit a crescendo of sorts, with work that reaches for mass-market appeal, without letting go of his own brave and sometimes hard-hitting story and character elements.

While some may criticize his approach, few can deny his ability to make the screen come alive with deep, heart-felt characters, who in this case risked their lives fighting and gathered intelligence for a nation that treated them as second-class citizens. Nor can one deny his determined perseverance in the face of an increasingly commercial film industry. Miracle at St. Anna is one of Lee’s best and most important films to date.

Extra Features
The extra features on the disc are entertaining and informative, but light. Disney chose to forego an extensive supplement package for this Blu-ray release – probably setting up a much more extensive ‘Special Edition’ at some point. Deeds Not Words (HD, 17 minutes) features director Spike Lee, along with author James McBride, discussing the experiences of African-American soldiers during World War II, with a roundtable of veterans. The Buffalo Soldier Experience (HD, 20 minutes) is another featurette that details life for ‘Buffalo Soldiers’ during the Second World War. The piece features vintage video clips and photos, along with interviews from the filmmakers, historians, and veterans, including rare firsthand accounts. Rounding out the bonus features is a series of nine deleted scenes, which are also presented in HD.