Miramax Films released the scary and provocative what-if thriller Blindness on DVD last week. It is a story where characters remain nameless, and is eerily set in an unidentified stark metropolis where angry commuters start their moribund day engaged in multiple acts of road rage along gridlocked and congested streets. A young man (Yusuke Iseya) on his way to work is suddenly stricken with complete blindness, and another man comes to his aid by driving him home, and then proceeds to steal his car.

Directed with a firm and steady hand by City of God director Fernando Meirelles, Blindness is adapted from the apocalyptic novel of controversial Portuguese writer and Nobel Prize winner, Jose Saramago. 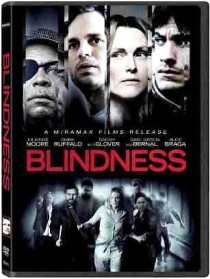 The blindness progressively spreads across the city, affecting the eye doctor (Mark Ruffalo) the blinded motorist visits, and all the patients in his office; including a hooker (Alicia Braga) who momentarily mistakes her sudden blindness during a session with a john, as the weirdest but possibly best sex she’s ever had.

As the government begins to track the advancing epidemic, victims are rounded up and herded into a filthy quarantined prison with little food and even less medical treatment. The eye doctor’s devoted wife (Julianne Moore) is for some unknown reason, the only human resistant to the mysterious disease. But she keeps it secret and feigns blindness, in order to remain by her husband’s side, as he’s forced into captivity.

What follows is a paranoia-fueled journey into desperation and brutality in the closed community. An all out war erupts between inmates as criminals and the physically powerful prey upon the weak over food and other necessities. As the only sighted resident, the Doctor’s wife is the only person who can stop to the violence, but saving her loved ones could mean sinking to the level of the worst of her adversaries, as she tries to preserve a small pocket of humanity.

Brilliant and nail-biting from beginning to end, Blindness is an amazing film that simply needs to be watched and discussed.