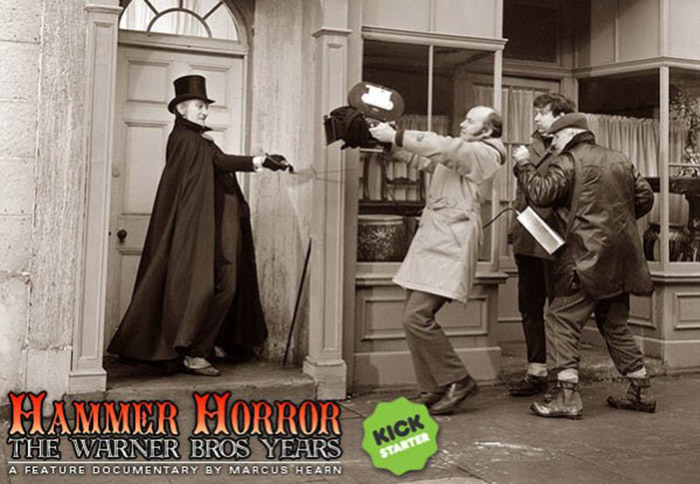 The classic Hammer films from Warner Bros are now finally starting to appear on Blu-ray. However, they have never received an in-depth exploration in any special feature or documentary. Now, the fascinating story can finally be told in this unprecedented 90-minute documentary, Hammer Horror: The Warner Bros. Years, written and directed by Marcus Hearn, Hammer Films’ official historian. The documentary will feature exclusive interviews with many of the key players from that period, as well as authors and film historians like Jonathan Rigby and Constantine Nasr. Also included will be rare production stills, film footage, Hammer’s original shooting locations, and access to previously unseen archive documents. The documentary will be available via streaming and in a limited blu-ray release, exclusive to our Kickstarter campaign. In addition to the main feature, the blu-ray will also contain extended interviews with some of the key participants.

In the 1950s Hammer, England’s world-renowned production company, initiated a new style of horror filmmaking that transformed the genre. At the end of the 1960s, the world that Hammer had helped to create was changing fast – the once-reliable business model was unraveling and audiences wanted something new from their films.

Amid this uncertainty, Hammer’s short-term survival was secured by an alliance with American distributor Warner Bros. The films the two companies made together are among the most renowned in Hammer’s history. Classics such as Dracula Has Risen From the Grave (1968), Frankenstein Must Be Destroyed (1970) and Taste the Blood of Dracula (1970) were produced alongside the Oscar-nominated epic When Dinosaurs Ruled the Earth (1970), the disturbing thriller Crescendo (1970) and the bizarre sci-fi western Moon Zero Two (1969).

The films became increasingly experimental in the 1970s, challenging the perception of traditional Gothic horror with Dracula A.D. 1972 (1972), The Satanic Rites of Dracula (1973) and The Legend of the 7 Golden Vampires (1974).

Support this project in order to see the film made Right Here.