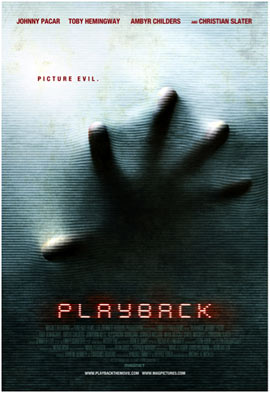 A red band trailer for the horror film Playback has turned up on Hulu. Playback is available now on-demand and in theaters on March 9th. The film was written and directed by Michael A. Nickles, and stars Johnny Pacar, Ambyr Childers, Christian Slater, Jonathan Keltz, Alessandra Torresani, Toby Hemingway, Jennifer Missoni and Luke Bonczyk.

While digging into their town’s infamous past, a group of high school students unwittingly unlock an even darker secret. Now, an evil spirit has been awakened and will stop at nothing to find his true heir.

Magnolia Pictures’ Magnet Releasing genre label will release Playback, which was directed by Michael A. Nickles, who previously helmed the movies Just Peck, 2008 XII, This Is Not a Film, and 1999 Do You Wanna Dance.

Check out the red band trailer below, along with the green band (for the squeamish).