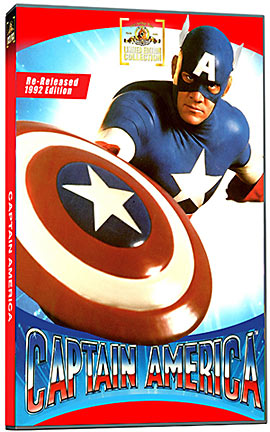 Years before Marvel Entertainment released the recent Captain America: The First Avenger with Chris Evans- and back when comic-based movies received no respect – Jadran Film and 21st Century Film Corporation licensed the character for a low-budget take on the Marvel hero, and gave Matt Salinger the famed red, white and blue shield of Steve Rogers, a World War II-era American soldier who volunteers to undergo experiments to become a new breed of super-soldier, codenamed Captain America. This charming piece of B-movie history recalls a time of post-1980’s action TV shows, and the end of the cult mainstream (when indie genre films were getting broad theatrical releases).

In Captain America, the namesake hero is charged with infiltrating Germany to sabotage Nazi rockets pointed at the U.S. In order to accomplish his mission, he must face off against Nazi superhuman warrior Red Skull (Scott Paulin) who defeats the hero, throwing him into suspended animation. Frozen for 50 years, Captain America is found and revived only to find that Red Skull has changed identities and has targeted the President of the United States (Ronny Cox) for assassination.

My big issue with all of the DVD On-Demand titles being released is, most have little or no special features included for fans to dig into. The titles are made for die-hard fans, and we want behind-the-scenes featurettes, trailers, and trivia to digest, along with the movies themselves.

Check out the trailer and film stills for Captain America below.