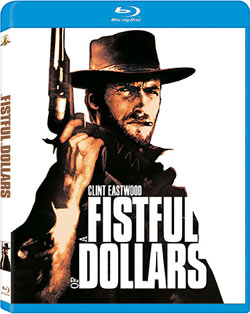 Although there were many films that had already been made called “spaghetti westerns,” Sergio Leone remake the genre with his great love for westerns and the humor he carefully wove into his story lines. The plot for A Fistful of Dollars was based on Akira Kurosawa’s 1961 classic Yojimbo, however Leone managed to create a work that easily stands on its own, and would later serve as a model for countless movies that followed.

In A Fistful of Dollars, Clint Eastwood plays a cynical gunfighter who arrives in San Miguel, a grim, dusty border town, and offers his services to two feuding gangs. Neither gang is aware that he’s playing both sides of the fence, and each thinks their using him, but the stranger’s plan is to outsmart both sides. A Fistful of Dollars was the first installment in a cycle commonly known as the “Dollars” trilogy. However, when United Artists later distributed the film in the United States, the studio coined another term for it: the “Man With No Name” trilogy. While not as impressive as the 1965 movie For a Few Dollars More or the 1966 The Good, the Bad, and the Ugly (arguably the seminal of the bunch), A Fistful of Dollars contains all of Leone’s trademark characterristics including quiet characters, dramatic close-ups, and the chilling music of Ennio Morricone. A Fistful of Dollars remains an exciting film from beginning to end.