Wonder Woman may be headed to the small screen instead of the big screen, according to LiveFeed. The report indicates that Warner Bros. Television is developing a modern-day reboot of the classic DC comic book heroine and has nabbed David E. Kelley, the showrunner behind legal dramas such as Ally McBeal, Boston Legal and The Practice, to steer the project.

This comes after nearly a decade of attempts by Warner Bros. and producer Joel Silver to mount a big-screen version of the heroine’s adventures. Actresses ranging from Angelina Jolie to Beyonce Knowles to Megan Fox have thrown their hat in the ring for the starring role at one time or another, and in 2005, Warner Bros. announced fandom favorite Joss Whedon would write and direct the film adaptation. But Whedon apparently never ended up being able to finish the draft, and two years later left the project.

The 1975-79 television series starring Lynda Carter remains the most memorable version of the character in pop culture. However, NBC’s Bionic Woman – which was likewise best known for its 1970s TV version – could haunt attempts to get the new Wonder Woman series launched, and Fox’s Dollhouse struggled during its two seasons on Fox. But if any place exists for a female-driven superhero series, it could be on TV rather than film. While movies like Elektra starring Jennifer Garner, bombed on the big screen, the small-screen has been home to Buffy the Vampire Slayer, a character which failed as a movie, and Alias, Garner’s popular espionage action series. 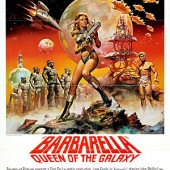