MGM Home Entertainment released the family-friendly comedy The Pink Panther 2 on Blu-ray disc yesterday, June 23rd. This sequel to the popular 2006 hit, revolves around a master thief known as the Tornado, who heists four of the world’s most valuable and legendary artifacts – the Magna Carta, the Shroud of Turin, the Royal Emperor’s Sword and of course France’s Pink Panther diamond – from locales around the globe. 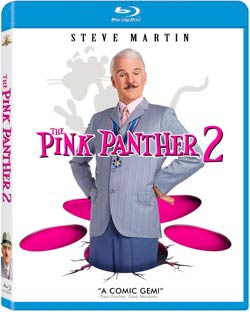 As they pursue a variety of leads and get additional assistance from a beautiful special agent from India (Aishwarya Rai), the trail appears to lead to an exiled art dealer named Avellaneda (Jeremy Irons). But Clouseau has his own ideas as to the identity of the criminal.

Pink Panther 2 simply exhibits a lack of quality humor, made even worse with the CGI-laden scenes featuring eponymous character, that just don’t work. The production had such a stellar group of actors at hand to make the film, but didn’t make use of their immense talents, especially five-time Golden Globe-nominee Steve Martin. The Pink Panther 2 will be fun for young children, but doesn’t go much further. One upside here, is Steve Martin’s return to a more physical style of comedy, which grabbed a few laughs from me now and then, but overall the film pales in comparison to the original cult classics made popular by British comedian Peter Sellers.

Bonus Features
Keeping in mind that The Pink Panther 2 is built for kids, the Blu-ray edition has a very nice cadre of family-friendly material. Disc One includes a four minute Gag Reel, along with two featurettes, titled Drama is Easy, Comedy is Dangerous and A Dream Team Like No Other, the latter of which focuses on the actors playing the investigative group hunting for master criminal The Tornado. There’s also an interactive trivia game on the disc that’s somewhat entertaining.

Disc Two features 27 classic Pink Panther cartoons lasting almost 3 hours, which were a real treat for me to watch again after so many years. The bonus features are rounded out on Disc Three with a Digital Copy of the film for portable media players. Digital Copy allows for quick and easy transfer of a digital movie file directly from disc to your desktop or portable device. Digital Copy is currently compatible with PC and Mac computers, as well as Apple iPod, iPhone and Windows Media based portable video players.