On May 12th, Paramount Pictures Home Entertainment released the comedy Without a Paddle, directed by Steven Brill, on Blu-ray for the first time. Originally released in 2004, the Blu-ray debut of this enjoyable adventure, comes with a surprising amount of bonus material and commentary. 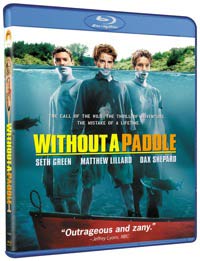 The film revolves around four friends who grew up together in Philadelphia, but run into tragedy when one of them suddenly dies. The three remaining friends reunite for the funeral, as they are saddened by the sudden loss of their fellow friend. While looking through their childhood belongings, they discover a trunk containing details of a quest their friend was attempting. It reveals that he was hot on the trail of $200,000 that went missing with airplane hijacker D.B. Cooper in 1971. They decide to try and find what their now deceased friend was searching for.

They take a canoe upriver through the mountains of Oregon State and everything that can go wrong, does, as they chase a crazy dream, while being hunted by two backwoods farmers, encounter death-defying rapids, meet tree-hugging hippie chicks and run across a crazy old mountain man played by Burt Reynolds.

The original Without a Paddle boasts a hilarious trio of comic actors with Seth Green, Matthew Lillard, and Dax Shepard, and is highly-entertaining at certain moments. It’s a lighthearted comedy that doesn’t take itself seriously at all, and ends up being a very well-done romp that will please viewers looking for a good laugh.