This may just be the scariest film of the year. The acclaimed documentary 2012: Science or Superstition, arrived on DVD January 27, 2009. To celebrate the release of the film on disc, FilmFetish has three copies to give away to readers. Don’t miss your chance to watch this thought-provoking movie.

You can find out more about 2012: Science or Superstition at www.2012dvd.com.

Several weeks ago, History alerted its viewers that the world may come to an end on December 21, 2012. A two-hour special kicking off Armageddon Week claimed that the 16th Century soothsayer, Nostradamus, warned of apocalypse in 2012; and, if that’s not enough, then try the Egyptians, the Freemasons and — yes, the ancient civilization that actually did have something to say about 2012, the Maya. Throughout, there was ominous music and dramatic narration warning of global apocalypse. And it also happened to be the #1 show on cable that night, pulling in nearly 4 million viewers.

This follows a holiday movie schedule in which it was hard to avoid dramatic teaser ads for Roland Emmerich’s (The Day After Tomorrow, Independence Day) 2009 end-times disaster movie, 2012 (recently moved to November ’09). 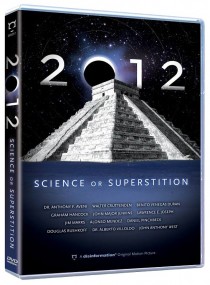 Counterbalancing this apocalyptic hype comes 2012: Science or Superstition, a new documentary from The Disinformation Company that has launched exclusively on Apple’s iTunes store and is already # 1 on the bestselling documentaries chart. It arrived on DVD January 27, 2009.

As Hollywood and the mainstream media distort and exploit the Mayan Calendar in their constant quest for ratings and box office success, more and more people are looking for information on what 2012 really means. 2012: Science or Superstition attempts to provide the answers.

The trailer for 2012: Science or Superstition is below.