Friday the 13th still stands as probably the most successful horror franchise of all-time. But for years Paramount didn’t release the uncut version of the first film in the U.S. on DVD. Well, fans rejoice – not only has Paramount come through with a stand out Blu-ray edition of the much imitated horror classic, they’ve loaded it with some exceptionally fun, if not thorough, extras, that should get fans in just the right mood for the remake, which hits theaters just seven days after this Blu-ray is released.

The Friday the 13th Uncut – Deluxe Edition features the uncensored version of the film that defined the 1980s slasher film phenomenon. Never before released on DVD in the U.S., this edition features blood and gore that was deemed too gruesome for audiences during its original theatrical release. 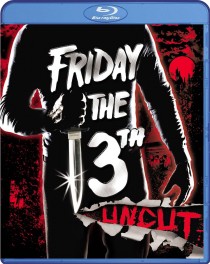 Most of you know the story of a mysterious machete-wielding killer who carves a grisly swath through a group of teenaged summer camp counselors, and features the future “six degrees” of Kevin Bacon, along with Laurie Bartram, Harry Crosby, Adrienne King, Robbi Morgan, Mark Nelson and Betsy Palmer, who took motherly love to new heights.

When a new owner and several young counselors gather to re-open Camp Crystal Lake, where a young boy drowned and several vicious unsolved murders occurred years earlier, they ignore a seemingly disturbed local’s (Walt Gorney) warnings that the place has a “death curse”. Then one by one, they find out just how unlucky Friday the 13th can be as they are stalked by a violent psychopath.

What makes this film a true stand out, is that it took gore to new levels not previously seen. Granted, even Sean S. Cunningham admits in one of the documentaries in the disc set, that he was given a mantra to “copy” the success of Halloween, which was released two years earlier. However, as with instant classics like The Matrix, it was the execution and style that made the film one of the scariest of all time. One that can be enjoyed over and over again.

The set up may seem a bit dated now, but when it was released, and I found my young self somehow inside the local Loews to watch it, I came out feeling that I had never seen anything like it before. In fact watching the Blu-ray for this review was so much fun, and brought back incredible memories of childhood and the beginning of my personal infatuation with cinema.

Extras
The bonus features start out with the Uncut Version of the film, accompanied by an enjoyable commentary by director Sean S. Cunningham, the cast, and crew.

The Friday the 13th Reunion (Presented in HD) features a Q&A from September 13, 2008, with Friday the 13th alumni, in Lexington, KY, at the Scare Fest Horror and Paranormal Convention.

Fresh Cuts: New Tales From Friday the 13th (Presented in HD) focuses on the classic film, along with some of the cast.

The Man Behind the Legacy: Sean S. Cunningham (Presented in HD) is a feature on the director that takes place primarily at his beautiful home. It updates fans on where his career has gone since the film, and also features his son, who is also involved with filmmaking.

The Lost Tales of Camp Blood (Presented in HD) looks at some of the murders that took place at the historic location of the film.

The extras are rounded out by a feature on the special effects called Secrets Galore Behind the Gore, and the original theatrical trailer. Some of the extras are redundant, however the filmmakers involved in all of them, are fascinating and funny storytellers. The anecdotes are entertaining and worth watching, especially for hardcore fans.

Friday the 13th is one of the classics of the genre, and will be enjoyed – with a side of popcorn and a dark room – for generations to come.

Below is one of the original trailers for Friday the 13th.

And here is the trailer for His Name Was Jason: Thirty Years Of Friday the 13th, the new documentary from Anchor Bay that also hits store shelves on February 3rd.