One of Hollywood’s (and one of my) all-time favorite leading ladies, Audrey Hepburn, is featured in another of her most spirited and enjoyable performances in Funny Face, which returned in a brand new DVD edition on January 13th, from Paramount Home Entertainment. The majestic star headlines this newest release from the Paramount Centennial Collection, which is timed in conjunction with her 80th birthday anniversary.

Audrey Hepburn stars alongside the legendary Fred Astaire as a bookish salesgirl who reluctantly allows a fashion photographer to transform her into an international supermodel. Hepburn glows from beginning to end with her trademark heart-felt innocence that resonates on-screen. Directed by former Broadway dancer Stanley Donen, the film whisks along at a rhythmic pace, providing a window into the optimism of its time, accented by music from George and Ira Gershwin, based on George Gershwin’s 1927 Broadway musical. 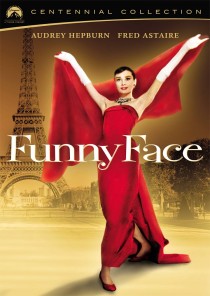 Fred Astaire plays a fashion photographer whose character is based on Richard Avedon, who acted as the film’s visual consultant. Avedon lends his eye to artistic interpretations of rich color and style that only add to the enjoyment of the film in this format.

After discovering the owlish Greenwich Village bookstore clerk, Astaire whisks the wide-eyed girl off to Paris and transforms her into the fashion world’s hottest model. Along the way, he falls in love with her, and attempts to wean her away from such phony intellectuals as Professor Emile Flostre (played by Michel Auclair).

The Gershwin tunes included in the film include the title song S’wonderful, How Long Has This Been Going On and He Loves and She Loves. Also featured is Think Pink by Kay Thompson. Thompson also gives an incredible performance as fashion magazine editor Maggie Prescott, and was a driving force behind many of the powerful vocal arrangements.

The Centennial Collection DVD contains a special featurette titled Kay Thompson: “Think Pink”, that’s focused on Thompson’s life and work. The thorough homage makes this edition well worth buying. There are also two additional new bonuses, including a documentary on the history of Paramount’s VistaVision format, called This Is VistaVision, as well as an exposé on fashion photography that documents an actual shoot, while discussing Richard Avedon’s many contributions to the creation of the film. The Fashion Designer And His Muse covers Hepburn’s friendship and collaboration with French fashion designer Hubert de Givenchy.

The extras are rounded out the segment Parisian Dreams, a Retrospective on Paramount in the 1950s, the original theatrical trailer, and a series of vintage photo galleries.

As with Breakfast At Tiffany’s, Funny Face is available in a two-disc set including an eight-page memorabilia booklet and a boat-load of all-new bonus features, in numbered series packaging.

This is another edition from the Paramount Centennial Collection well worth adding to your disc library.

Here is a complete breakdown of the discs: