On January 13th, Fox Home Entertainment released the horror thriller Mirrors: Unrated, on DVD and Blu-ray. I know this film was widely panned by critics, but I actually thought it was ok. Mirrors has three very powerful things going for it. Kiefer Sutherland, the stunning Paula Patton, and director Alexandre Aja, who brings a unique visual sensibility and vocabulary to his horror films. Even the ones, like Mirrors, that fall rather flat overall.

Not that Mirrors is incredible by any standard; but I don’t feel it deserved the pounding it received when it hit theaters. Ultimately, the film will be lost amid far better projects that Kiefer has been involved with, but it was watchable, and at moments, enjoyable.

Kiefer Sutherland comes face-to-face with unseen forces of evil, along with his own inner-demons in Mirrors. He’s a former cop waiting to be re-instated on the force after a bad shooting, but has problems with alcohol and has separated from his wife. Dealing with post-traumatic stress disorder, he takes a job as a night watchman at an old luxury department store that was burned in a large fire. Soon after taking the job, he becomes haunted by horrific visions in the large mirrors of the store. Beyond projecting gruesome images of the past, the mirrors appear to be manipulating reality. As he investigates the visions, he realizes the malevolent, otherworldly force is using reflections as a gateway to terrorize him and his family. 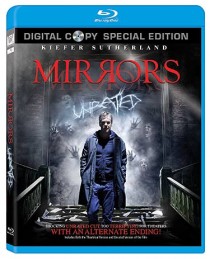 For hardcore fans of the genre, Mirrors may come across as a by-the-numbers thriller taking its cues from the far-better Asian original. But if you’re looking for a decent night of fright, and want something more than slasher-hacker-gore, it’s worth a view.

For extra content, there’s two versions of the film to start with, including the theatrical and an unrated version, which has a few additional gore scenes. The first featurette is Reflections: The Making Of Mirrors Shockumentary, which is a pleasant, if not in-depth, making-of documentary. Next up is the Mythology Of Mirrors: Behind The Mirror, a documentary designed to give viewers a broader understanding of the cultural and historical mythology behind mirrors. This is a fairly interesting doc featuring a group of interviews with two University folklorists and one “occultist” who discuss the tales of Narcissus, Perseus and Medusa, to give viewers a better understanding of some of the potential themes of the movie. The Anna Esseker Hospital Footage Includes 16mm footage that creates a backstory to illustrate Anna’s suffering. The footage is presented in home movie style and creates a complete story, rather than the bits and pieces hinted at in the film. Next up is a very short Animated Storyboard Sequence that illustrates the film’s jaw ripping scene in detail. The extras are rounded out with Deleted Scenes and an Alternate Ending which includes seven deleted scenes with optional audio commentary from filmmakers Aja and Levasseur. Most of these new scenes focus on the character of Ben Carson. Several of the scenes involve the investigation of the Mayflower Department Store and also feature more scenes between Carson and the day watchman Lorenzo Sapelli (John Shrapnel).