Dexter: The Complete First Season made its Blu-ray Disc debut on January 6th, from Showtime Networks, CBS Home Entertainment and Paramount Home Entertainment. Based on the novel Darkly Dreaming Dexter by Jeff Lindsay, Dexter is an incredibly addictive crime drama that stands out as utterly original, darkly funny, and completely engrossing. The show features a vicious sociopath that you’re not ashamed to cheer for.

It has been an incredible treat to watch the entire first season on Blu-ray, particularly because I hadn’t watched all of the episodes. My friend Lee turned me onto Dexter, while at San Diego Comic-Con last year. I made it a point to watch as many episodes as possible, but having the opportunity to watch the entire first season in sequence, has been exciting. The wicked writing and complex performance of Emmy and Golden Globe-nominated actor Michael C. Hall, driven by his on-going wry commentary, brings you into a dark corner of every dingy, blood-soaked room that he plies his trade. 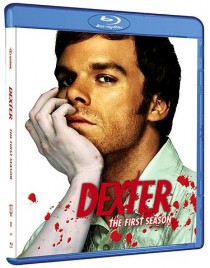 The thorough extra features were a nice addition to the episodes. My only issue with them, was that more should have been available directly on the discs, rather than requiring BD-Live compliant hardware for so much of the content. With the exception of two audio commentaries that were also available on the DVD release, much of this set’s bonus features are only available via BD-Live, including several that were available in the DVD set.

The first of the two commentaries available directly on the disc, was recorded for episode 6, Return to Sender, and features actors Jennifer Carpenter, David Zayas, Lauren Velez and Erik King. The group shares great chemistry on the show, and that translates into a jazzy commentary, that focuses more on episode musings and humor, rather than thorough behind-the-scenes info.

The more structured commentary comes from producers Sara Colleton, Clyde Phillips and Daniel Cerrone. They offer their thoughts on the season finale Born Free, as well as analyze the entire season’s progression, and the show’s relationship to the novel.

BD-Live features include The Academy of Blood: A Killer Course, Witnessed in Blood-A True Murder Investigation, and a cool Michael C. Hall Podcast, along with the first two episodes of the upcoming Showtime series United States of Tara.

CLICK HERE to purchase Dexter: The First Season on Blu-ray.