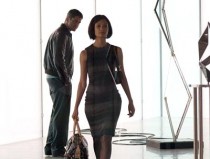 I just hope he solves the mystery of how to make a hit. Ritchie was one of the most original and talented guys to come along in years, with Lock, Stock and Two Smoking Barrels , and Snatch. Then came Swept Away? I thought he would make a swash-buckling, gun barrelling comeback with Revolver, a gangster pic starring Jason Statham, who is his dude. But it never got released.

Well, Ritchie has two pics in the pipeline that I am really looking forward to. He wrapped RocknRolla earlier this year, and it looks like it’ll get an October 2008 release. It’s stuffed with talent, including Gerard Butler, Jeremy Piven, beautiful Thandie Newton (who’s the luck guy that knocked her up?), Idris Elba, and Ludacris. It revolves around London’s criminal underworld, as it takes notice of a Russian mobster’s land dealings.

Variety just reported on the other film, which he’ll soon be sinking his Brit teeth into. It’s Sherlock Holmes. According to reports, Lionel Wigram and Dan Lin are producing the film for Warner Brothers. They’ll be taking over from the (BBC), who produced the popular TV series in the 60’s, that I grew up watching re-runs of.

Film Fetish Trivia: Arthur Conan Doyle’s stories about the pipe-wielding Holmes have been portrayed in more than 200 film and TV shows.