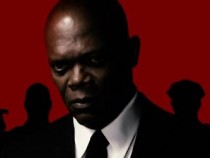 Samuel L. Jackson, who will soon don comic-badness in the Frank Miller-directed The Spirit, as The Octopus (pictured), has just signed a deal with CBS TV to develop projects.

According to the Variety story, there is no acting component to the deal, although it hinted that he could play a cameo role in whatever project he configures.

Jackson had already dabbling in TV, as a producer on Spike TV’s Afro Samurai, and voicing the character. His more recent TV work was serving as narrator of PBS documentary The War.

I look forward to having as great an influence on other’s lives as television has had on mine through this collaboration.

In other news, I am totally freakin’ amped that Afro Samurai returns for another season on Spike TV this fall.