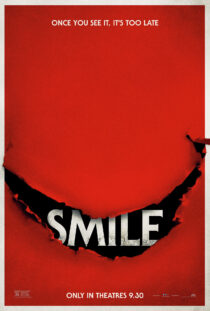 On the heels of the success of Top Gun: Maverick, Paramount Pictures is doing some early promotion for one of it’s upcoming horror films titled Smile.. The film centers on Dr. Rose Cotter (Sosie Bacon) who witnesses a bizarre, traumatic incident involving a patient. Soon after Dr. Cotter begins experiencing frightening occurrences that she can’t explain. As an overwhelming terror begins taking over her life, Rose must confront her troubling past in order to survive and escape her horrifying new reality.

The horror thriller Smile will be released in movie theaters on September 30th, 2022.