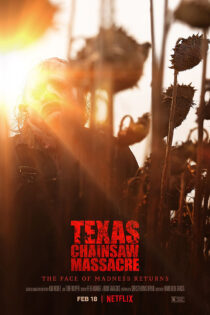 Netflix has released the brutal first trailer for their Texas Chainsaw Massacre sequel. The new film is a follow-up to the classic 1974 slasher sees the return of not only Leatherface, but the series’ original surviving female, Sally.

The trailer centers on a group of enterprising young adults with plans to rejuvenate the ghost town of Harlow, Texas. What they don’t realize is that their business venture is disturbing the town’s most private – and psychotic – resident. That’s about the time when someone calls Sally to warn her of Leatherface’s reemergence, giving her the opportunity for revenge 50 years in the making.