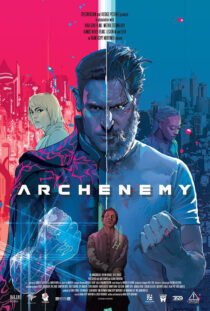 One of the real issues I see emerging from the pandemic is it’s ongoing effects on the media landscape, and not simply related to the growth of Streaming. The fact is, it’s so much harder for movie fans to even know about much of the quality content being produced and released today. How many of you even knew about Archenemy? Hollywood has a real challenge on it’s hands as the ability to market product becomes more fragmented. Large players like Disney won’t be affected because they have the deep pockets necessary to blanket the marketing landscape. But unless you’re a serious cinephile, many casual moviegoers will continue to miss out on great entertainment. Conversely, burgeoning filmmakers won’t find their audience.

Enough ranting. Written and directed by Adam Egypt Mortimer, Archenemy centers on Max Fist (Joe Manganiello), a derelict who claims to be a hero from another dimension. According to his story, he fell through time and space to Earth, and now has no powers. No one believes him except for a local teen named Hamster (Skylan Brooks). Together, they take to the streets to wipe out the local drug syndicate and its vicious crime boss known as The Manager (Glenn Howerton).

Archenemy could be a lead up to the Deathstroke standalone film. Manganiello is attached to play Deathstroke, where he is expected to reprise his role as the DC Comics character from Zack Snyder’s Justice League, due to be “released” on March 18, 2021. Filmmaker Gareth Evans (The Raid: Redemption, The Raid 2) is attached to helm Deathstroke.

Image Entertainment will released Archenemy on DVD and Blu-ray next week on February 16th.