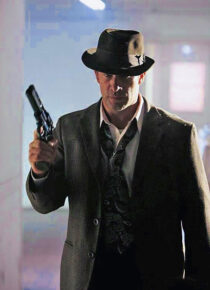 Production company Renegade Entertainment is teaming up with Richard Rionda Del Castro’s Hannibal Media to produce a sequel to the cult favorite Give ‘em Hell Malone, with Thomas Jane returning to star in the namesake role of Malone. Screenwriter Mark Hosack will also return for the sequel, which is planned as the re-launch of the Malone franchise.

In the sequel, legendary big city gunman Malone has spent the last ten years hiding from his past. But when a chance encounter suddenly exposes him to the world, and a sinister attack starts the clock ticking on his remaining hours to live, Malone sets out to find his killer on a perilous railway known as The Line. In the tradition of classic noirs like Rudolph Mate’s D.O.A. and Richard Fleischer’s The Narrow Margin, and neo-noirs such as the Coen’s No Country For Old Men and David Cronenberg’s A History of Violence, the new entry in the Malone franchise is described as an against-the-clock thriller that pits Malone against his biggest enemy.

Principal photography is set to commence this summer.

The original 2009 film was directed by Russell Mulcahy and starred Ving Rhames, Elsa Pataky and French Stewart, in addition to Jane.

Jane said, “Malone has always been one of my favorite characters and we’re all thrilled that the original film found such a devoted fanbase. I couldn’t stop thinking about where Malone would be now and where he is headed. Mark Hosack has done it again with another terrific Malone adventure. I read his riveting screenplay and said I’m in.”

Renegade Entertainment has had a busy year since launching in 2019. The production shingle completed production on the western thriller The Last Son of Isaac LeMay, also starring Thomas Jane, along with Sam Worthington and Colson Baker, and the horror comedy Slayers starring Abigail Breslin, Thomas Jane and Malin Akerman. The company will soon start production on the crime drama series Troppo alongside AGC Television, also starring Jane. Among their projects in development, Renegade is developing an adaptation of Stephen King’s From a Buick 8, marking the fourth collaboration between Jane and King, following 1922, The Mist, and Dreamcatcher.

Thomas Jane recently directed an acclaimed episode of The Expanse. His film The Vanished is currently the #2 film in the US on Netflix, and his Venice Film Festival debut Run Hide Fight premiered this month. Courtney Lauren Penn oversees content production at Renegade Entertainment alongside Jane.

Hannibal Media is gearing up for a busy year that will include #Tsunami, an action adventure about a giant tsunami that hits L.A. causing massive destruction unlike anything the city has ever seen. Korea’s top box office actor Gang Dong-Won is part of an international cast set to show L.A.’s culturally diverse communities coming together during the disaster. The company is also developing the Frank Grillo action film MIA, a.k.a. Missing in Action, along with the films Bounty, Collide, Welcome to Rio, The Old Gun and Red Squad.