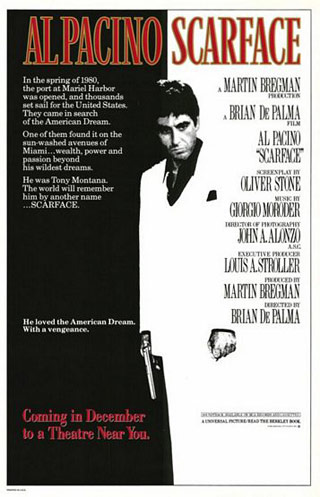 Deadline reports that, because both the 1932 Chicago bootlegging film and 1983 Miami cocaine-dealing versions of Scarface are such enduring cult classics Universal Pictures has been refining the script with several screenwriters, while keeping the new movie’s details under wraps. According to their report the studio is in heated talks with British director David Yates, who directed the final four films in the Harry Potter film series, to take the reins of the Scarface remake.

On Scarface, Yates has the Herculean task with updating the crime saga so it lives up to the Ben Hecht/Howard Hawks/Paul Muni and Oliver Stone/Brian De Palma/Al Pacino classics, which have became a part of popular and urban culture. Deadline says the new movie will not be a remake or sequel but a reboot about a crime kingpin who, through a ruthless campaign of ambition, chases his own American Dream – whatever that may mean in today’s world. Former Universal head Marc Shmuger and his Global Produce banner will produce Scarface, along with Martin Bregman, who produced the 1983 Al Pacino version.