There’s less than 10 hours left to help filmmaker Erin Li with her goal of raising funds for her short sci-fi film Kepler X-47. CLICK HERE to find out more about the project, or read below.

I’m really excited to be directing my first sci-fi film, KEPLER X-47, this summer. KEPLER X-47 is a dystopian film about a woman who is struggling to adjust to her new life in a human zoo exhibit on an alien planet 5,000 light-years from Earth.

The film was partly inspired by my own career change. I grew up not knowing many artists or working artists, and didn’t even think about a creative path as a possibility for my future. After graduation, I took a corporate job and although I learned so much during my time there and have no regrets, it was not what I expected. I realized that I needed to pursue what I was passionate about, not other people’s dreams.

I wanted to explore the idea of humans being held captive like animals, but by choice. It is “normal” for people, at least in the United States, to be chained to their desks for at least eight hours a day, live in one box for most of the year, take one or two weeks of vacation, etc. Most of us accept life as it is, without question.

KEPLER X-47’s theme focuses on this preference for comfort and security over freedom and uncertainty. The film also explores our obsession with obtaining material goods, consumerism and other absurdities of modern day living. 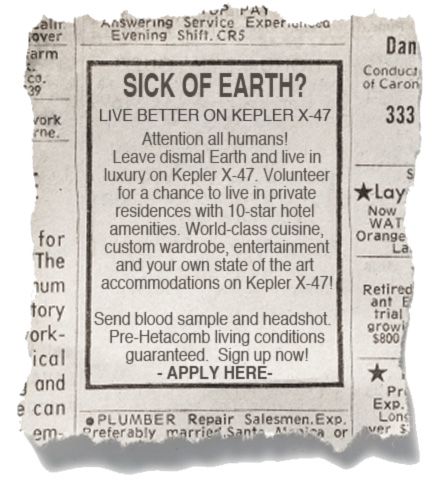