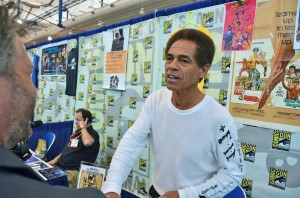 Shidoshi Ron Van Clief, Grandmaster Michael Jai White, Film Producer Warrington Hudlin and many other martial artists have been posting tributes and their personal memories of iconic martial artist and action film star Jim Kelly, who passed away last night at the age of 67 at his home in San Diego. According to a CNN story, Kelly’s former wife Marilyn Dishman said that the actor died Saturday of cancer, but did not elaborate.

Kelly was an inspiration to many people around the world, and it all started in the 1970s, when he exploded onto the action movie scene in the cult classic martial arts film Enter the Dragon, where he starred opposite screen legend Bruce Lee as the cool and charismatic fighter Williams. Kelly had noted in many interviews that he and Bruce became great friends during and after shooting Enter the Dragon, partly because they shared a sense of struggle to change a system that many times wasn’t fair to minorities both on and off screen.

His athletic career began in high school, where he played basketball & football and also competed in track and field. According to a post at the American Cancer Society’s website by Susie Ishmael Tipton, Jim Kelly attended Bourbon County High School in Paris, Kentucky. Kelly went on to attend the University of Louisville where he played football on a 4-year athletic scholarship, but according to an online biography, he left during his freshman year to study Okinawa Shorin-ryu karate with Parker Shelton in Lexington, Kentucky. Kelly attained a green belt under Shelton. He attained his first black belt in Okinawa Shorin-ryu from Marine Sergeant Leroy Edwards in San Diego, California.

After achieving his first black belt, Kelly went on to train in Okinawa-te karate under Gordon Doversola. Kelly won the Huntington Beach Classic during his time at Doversola’s dojo, where many other notable fighters such as Joe Lewis also trained. Kelly credited Doversola with getting him ready to fight in big tournaments. After winning the middleweight title at the 1971 Long Beach International Karate Championships in Long Beach, he opened his own martial arts school, where he taught karate to actor Calvin Lockhart for a role in the thriller Melinda. Kelly ended up playing a martial arts instructor in that movie.

During a 2010 interview with salon.com, Kelly said he began studying martial arts in 1964 in Kentucky and later moved to California, where he earned his first black belt in karate. He said he set his sights on becoming an actor after winning karate tournaments. He also played college football. Kelly mentioned to me when I first met him at San Diego Comic-Con in 2012, that he continued to train in martial arts in later years, including Gracie System Brazilian Jiu-Jitsu, which he began studying with Royce Gracie and Rickson Gracie in 1990. He mentioned in an interview that he trained in their garage before they opened their first official Academy. He continued to train with the Gracie family when they opened a school in California.

Soon after that, actor Rockne Tarkington was supposed to play a major role in a film that Warner Brothers was co-producing with Hong Kong’s Golden Harvest Studios – the first cooperation between Eastern and Western studios of the kind – and he unexpectedly dropped out days before shooting in Hong Kong. That film was Enter the Dragon, a martial arts film classic that endures to this day as one of the great action films ever produced. The film cemented Jim Kelly and Bruce Lee as icons of cinema, men who went against the tide and found success that – at that time – not many in U.S. studios were looking to give.

According to Jim Kelly’s personal website – a website that he announced to me when I met him for the second time in Pennsylvania – after making Enter The Dragon, Warner Bros. was so impressed, they signed him to a three picture deal, plus an option for a television series. He was the first Martial Artist to sign this type of deal with a major American motion picture studio.

In addition to his acting, Kelly was also a professional tennis player on the USTA Senior Men’s Circuit. In 2004, he appeared with NBA star LeBron James in the Nike commercial “Chamber of Fear,” which spoofed the Bruce Lee film Game of Death. He resided in Southern California and worked as a professional tennis coach and was still a popular draw at conventions such as San Diego Comic-Con International, where I first met him in 2012 and took this photo.

Jim Kelly has and will continue to, inspire and motivate people from all over the world of all races and ethnicities. He was a personal inspiration for me and many kids in my neighborhood growing up and will continue to motivate athletes and movie fans around the globe.

Kelly’s ex-wife Marylin Dishman announced his passing, stating that his family is “having trouble processing it,” and that ‘like his mother,’ there would be no funeral service. However, there is a memorial service planned in Lexington, Kentucky.

This is a message that went out to Jim Kelly’s fans, from his official Facebook page:

“It is with sadness and regret that we must announce the passing of a great man and legend Jim Kelly. He will be deeply missed by all. Jim had great love for his family, friends, tennis and martial arts.

We are devastated by Jim’s passing but through faith and support from family, friends and fans-we are comforted, blessed and will remain strong.

He was survived by his lifetime partner of 33 years and wife.”