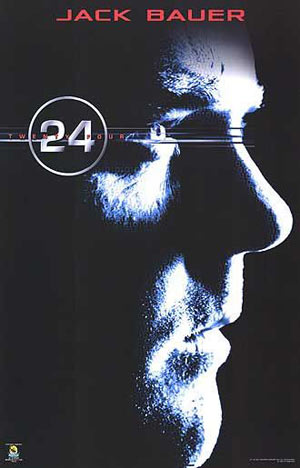 Variety reports that 24 will indeed return to Fox next summer as a limited series, with a roll out over 12 weeks beginning next May. The innovative series originally wrapped its eight-season run on Fox in 2010. According to the report, the M. Night Shyamalan-produced mystery event series Wayward Pines will follow 24.

Fox chairman Kevin Reilly said on an Upfront Television Sales call that 24 producer Howard Gordon always had the idea of doing a feature film for 24, but they all agreed that 24 shouldn’t be compressed into the two hour movie format. But because there will only be 12 episodes, the event series will pan out chronologically, but skip hours — possibly jumping from 8am to 10am, for example.

Kiefer Sutherland, who spent the past two seasons on the Fox drama “Touch,” which was axed last week, will be back in the central role as Agent Jack Bauer.

While 24 will not return to its roots as a full-blown series on Fox, producers see serious “franchise-ability” in the program, saying it could return again “18, 20 months later” for another event series after next summer’s run.

The M. Night Shyamalan-produced Wayward Pines – created by Chad Hodge – centers on Secret Service agent Ethan Burke, who arrives in the bucolic town of Wayward Pines, Idaho, on a mission to find two missing federal agents. But instead of answers, Ethan’s investigation only turns up more questions. Each step closer to the truth takes Ethan further from the life he knew, from the husband and father he was, until he must face the terrifying reality that he may never get out of Wayward Pines alive.