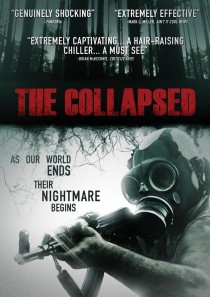 Tomorrow, Anchor Bay Entertainment will release the apocalyptic thriller The Collapsed on DVD. The film gives a chilling glimpse into one family’s battle to stay alive while traversing a hellish landscape of barbarism and cannibalism. Society has collapsed after an unknown event has catapulted civilization into a fatal downward spiral.

I have three copies of The Collapsed on DVD that we’re giving away to readers.

In order to be entered The Collapsed random drawing:

I’ll be running The Collapsed contest through Friday, June 29, 2012.

More about The Collapsed

The Collapsed is a chilling glimpse into one family’s battle to stay alive while traversing a hellish landscape of barbarism and cannibalism.

Fleeing the city, their only hope of sanctuary is a rural hometown from their past, Dover’s Bend. With the constant threat of violent death forcing them to stay as far away from civilization as possible, they take to the forest. However, they soon discover that the danger posed by other survivors may be the least of their worries. Someone – or something – seems to have followed them into the wilderness.

Check out a gallery of images from The Collapsed, below.