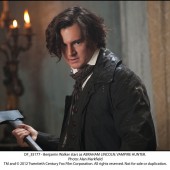 In the film, Abraham Lincoln – the 18th President of the United States – discovers vampires are planning to take over the U.S., and makes it his mission to eliminate them.

Check out the new images below, along with some that were previously released.