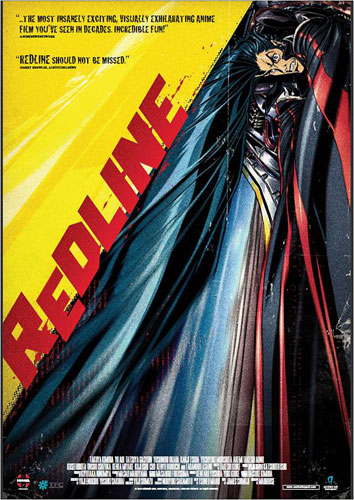 In celebration of its 20th Anniversary, Anchor Bay’s Manga label is set to release the highly anticipated animated film Redline, which had a limited theatrical run in Los Angeles starting December 2nd, 2011 and then in New York City, beginning on January 6th, of this year. Redline will be released on Blu-ray and DVD next week, on January 17th.

FilmFetish is conducting our own little celebration by giving away 2 copies of the Blu-ray edition of Redline to readers.

To be entered the Redline random drawing, you must follow these instructions:

I’ll be running the Redline contest through Tuesday, January 31, 2012.

Redline, which was produced by Ninja Scroll creators Studio Madhouse, won the Audience Official Selection Award for Animation at Fantasia and the Outstanding Achievement in Feature Filmmaking Animation Award at the Newport Beach Film Festival. It has received rave reviews even from those admittedly not anime fans. From its premiere at Fantastic Fest, AICN’s Harry Knowles said “Redline should not be missed, everyone came out smiling and happy. Fantastic!” He called it the “coolest Speed Racer ever, and that counts the Wachowski film.” Anime News Network called Redline “the most insanely exciting, visually exhilarating anime film you’ve seen in decades. Incredible fun!”

Redline is a racing film created by Japan’s Studio Madhouse (Paprika, The Girl Who Leapt Through Time, Summer Wars), and centers on the biggest and most deadly racing tournament in the universe. Only held once every five years, everyone wants to stake their claim to fame, including JP, a reckless dare-devil driver oblivious to speed limits with his ultra-customized car – all the while, organized crime and militaristic governments want to leverage the race to their own ends. Amongst the other elite rival drivers in the tournament, JP falls for the alluring Sonoshee – but will she prove his undoing, or can a high speed romance survive a mass destruction race?

CLICK HERE for stills from the movie and watch the trailer for Redline below.