An Aussie site called TheAge has posted 2 images of cars from George Miller’s upcoming Mad Max: Fury Road, along with some additional details on the status of the production. According to the report, these vehicles have spent the past few weeks under lock and key at Port Kembla, Australia, awaiting transport to Africa for filming.

Security is apparently tight for the dozens of vehicles being trucked in from Broken Hill, which includes an army of off-road buggies and a posse of menacing-looking trucks.

Max’s own pursuit vehicles were also in tow, made to resemble his beloved “Interceptor”, the juiced-up Ford XB GT Falcon coupe driven in the original film.

According to the post, the cars are bound for South Africa, where Mad Max 4 will shoot. Director George Miller had planned to shoot the new movie in Australia, near Broken Hill, but there was too much rain last year and the normally-desert landscape was covered in flowers – inappropriate for a post-apocalyptic nightmare.

Check out one image below and CLICK HERE to see another. 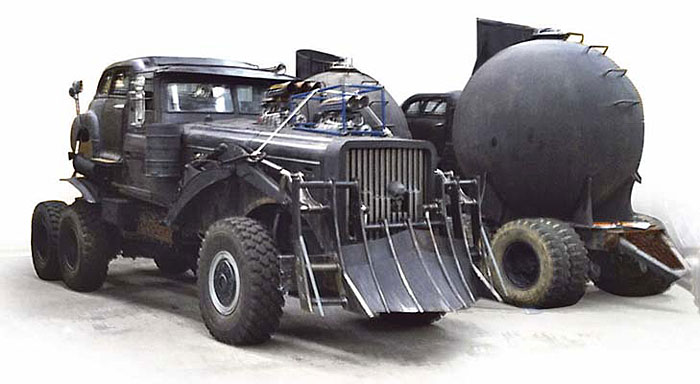