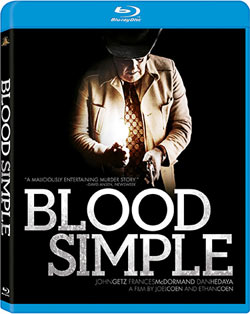 Ethan and Joel Coen’s cult classic Blood Simple, the visually stunning 1984 tale of murder and double-cross in a small town, was recently released on Blu-ray for the first time by Twentieth Century Fox Home Entertainment.

The classic film noir centers on an unscrupulous private eye who’s hired by Texas bar owner Marty (Dan Hedaya) to murder Marty’s faithless wife Abby (Frances McDormand) and her lover Ray (John Getz), one of Marty’s employees. But Visser makes slight modifications of the original plan to serve his own best interests. After a twist and the murder of one of a key character, things spiral out of control, bringing story (and the audience) rumbling through a string of darkly humorous events. Blood Simple hurtles forward with the speed and intensity of a bullet, delivering a devastating impact at its monumental climax.

Check out clips from Blood Simple below