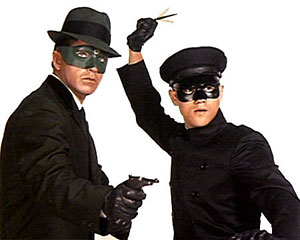 My good friend and Blvd. Warriors interviewee Hector Martinez reminded me that yesterday was the 45th anniversary of the first airing of the original Green Hornet TV series, which starred legendary martial artist and actor Bruce Lee and Van Williams.

George W. Trendle created The Green Hornet television series, which premiered on U.S. television on September 9, 1966. The series centered on Britt Reid (Van Williams), the daring young owner and publisher of “The Daily Sentinel,” who wore a mask and fought crime as The Green Hornet. Assisting Reid in his crusade were his secretary, Lenore Case (Wende Wagner), and his faithful valet Kato, a kung fu expert who drove the sleek “Black Beauty,” the Hornet’s well-armed car. While the police and general public believed the Green Hornet to be a ruthless criminal, the District Attorney knows Reid’s secret identity, and welcomed his assistance in fighting racketeers and criminals.

The Green Hornet was one of the earliest U.S. television shows to showcase kung fu, leading to an avalanche of urban cross-cultural references that continues to this day.

Van Williams, the actor that played Green Hornet in the series, will be making a special appearance at the next Chiller Theatre, which runs from October 28 – 30, 2011.

In addition to Van Williams, Chiller Theatre will welcome many other special guests from the worlds of art, sports, cult cinema and cult television at this edition. Included on the list are “Coffy” herself Pam Grier, Lou Gossett Jr. (An Officer and a Gentleman, Enemy Mine), Barbara Feldon (Agent 99 from Get Smart), Michael Pare, Bo Svenson (Kill Bill Vol. 2), Burt Young (Rocky), Frank Vincent (The Sopranos), Dirk Benedict & Dwight Schultz (The A-Team), Richard Kiel (Jaws from Moonraker and The Spy Who Loved Me), along with Haywood Nelson, Ernest Thomas & Danielle Spencer from the cult classic television series Whats Happening. Also in attendance will be porn star-turned actress Traci Lords, Gena Lee Nolin from Baywatch, and many, many others. Legendary World Heavyweight boxing champion Smokin’ Joe Frazier will also be making a special guest appearance during the weekend.