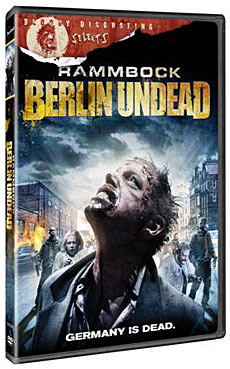 Rammbock: Berlin Undead follows its successful theatrical run with a nationwide DVD and VOD release on June 28, 2011. Called “a story of love set against a zombie apocalypse,” this is one “romance” flick that the guys in the relationship will be begging to watch on date night.

Rammbock: Berlin Undead, which has been hailed as one of the smartest films in the zombie genre. Released though The Collective’s home-video partnership with Vivendi Universal, Rammbock: Berlin Undead—as well as the other titles in the Bloody Disgusting series—features unrated content, bonus features and special packaging.

The Collective, a full-service entertainment management and content company, along with AMC Theatres (AMC) and BloodyDisgusting.com, have partnered to acquire and distribute the best new horror and thriller titles from the festival and international markets to AMC theatres across America. Bloody Disgusting premieres a new title in the series each month across 25 major US markets. After their theatrical runs, films from the series will be available to fans of the genre in DVD, Video on Demand (VOD), online and television. Released though The Collective’s home-video partnership with Vivendi Universal, DVDs for titles in the Bloody Disgusting series will feature unrated content, bonus features and special packaging for each title.