From the creative minds behind Planet Earth, the exhilarating 12-part series portraying the dramatic events that shaped America’s 400 year history, America the Story of Us, arrives in a multi-platform release featuring DVD, Blu-Ray, 412 page companion book and iTunes/Zune/Playstation downloads, on September 12, 2010.

To celebrate this epic release, FilmFetish is giving away 2 copies of the complete America the Story of Us 3-DVD series set to two lucky readers.

In order to be entered into the random drawing for your free copy of America the Story of Us, you must:

I’ll be running the America the Story of Us contest through Thursday, September 30, 2010.

More about the America the Story of Us DVD set

The most in-depth television series ever produced by History, America the Story of Us is the first television event in nearly 40 years to present a comprehensive telling of America’s monumental history, and the most elaborate and ambitious in the scale of its cinematic vision. And, on September 14, A&E Home Entertainment unveils this mother of all history lessons, a powerful and compelling 12-part series from the creative minds that brought us Planet Earth, featuring highly realistic CGI animation (the most ambitious CGI the network has ever applied to a historical narrative), dramatic re-creations and thoughtful insights from some of America’s most respected artists, business leaders, academics and intellectuals – as well as a very special introduction from President Barack Obama. For Americans of all walks, this extraordinary release will be available day-and-date on both extras-laden DVD and Blu-ray, online downloads, along with a stunning 412-page companion book containing heavily illustrated pages with over 300 full-color images, “charticles” and text.

Making history itself as the most watched premiere in network history – seen by nearly 6 million viewers – America the Story of Us tells the extraordinary story of how America was invented, looking at the moments where Americans harnessed technology to advance human progress – from the rigors of linking the continent by transcontinental railroad, the internet of its day, to triumphing over vertical space through construction of steel structured buildings to putting a man on the moon. This is history with roots in the physical world: wilderness, animals, weather, and the sea, and it’s brought to amazing life firsthand through patriots, frontiersmen, slaves, abolitionists, Native Americans, pioneers, immigrants, entrepreneurs and inventors. The series is also a story of conflict – Native American wars, slavery, the revolutionary war that birthed the nation, the civil war that divided it and the great world wars that shaped its future and an intensive look at the forces that have shaped our nation – the people, places and things that created this most astounding country.

Historical events covered in America the Story of Us include: the arrival of the first English settlers, the Revolutionary War, westward expansion, economic growth of the north and south, the Civil War, the settling of the Great Plains, the development of modern, industrialized cities, the California Gold Rush and the western frontier, the Great Depression and the Second World Wars right up to present day. And, among the breathtaking historical eras and events that have been meticulously recreated with CGI effects are a meteor that crashes through the Appalachian Mountains 300 million years ago to create the Cumberland Gap, the British Navy’s spectacular bombardment of the New York Harbor at the dawn of the Revolutionary War, New England whalers risking their lives to kill their valuable prey, the wide open western plains teeming with massive herds of buffalo, the construction of the Statue of Liberty, and the Erie Canal and transcontinental railroad that opened up central commercial routes and connected the continent together.

From the revolutionary war that birthed the nation to the civil war that divided it, and to the making of the modern world, America the Story of Us is an epic, dramatic, heartbreaking and triumphant journey that reminds us that American history truly belongs to we, the people. 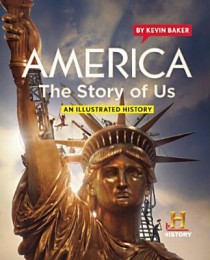 America: The Story of Us by Kevin Baker is a 412 page elegant and authoritative companion book that’s additional stories and incredible photography. America The Story of Us brings to life the vast forces that shaped this remarkable country and the ways in which revolutions in technology and transportation altered the way Americans lived, made money, and fought one another. Explored in these pages is the struggle between settlers and Native Americans; the epic conflict of slavery, from cotton gin to Civil War; the creation of the transcontinental railroad alongside the thundering herds of buffalo across the West; and how American ingenuity and determination both carried us through the Great Depression and won the Second World War.

Below are some related Limited Edition Shirt Designs created in celebration of the release and this holiday weekend. We hope you enjoy yours!