On July 14, all four mysteries of the final season of the hit U.K. televised thriller Wire In The Blood, come to DVD in Wire In The Blood: The Complete Sixth Season. To celebrate the release of the box set, FilmFetish is giving away three copies of entire 4 disc pack to three lucky readers.

In order to be entered in the random drawing for your free copy of Wire In The Blood: The Complete Sixth Season, here’s what you need to do:

I’ll be running this contest through the release date of July 14th, 2009.

More about Wire In The Blood
An international phenomenon draws to a close, as the BBC’s award-winning mystery series’ final season debuts. 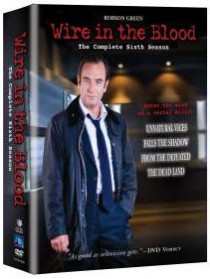 Over the course of six mesmerizing seasons, the BBC’s acclaimed mystery series Wire In The Blood has collected fans and rave reviews worldwide. Seen on BBC America, it recently earned the prestigious New York Festivals International TV Drama Gold World Medal. Based on Val McDermid’s best-selling novels, Wire In The Blood stars Robson Green (Grafters, Touching Evil) as Dr. Tony Hill, criminal expert and psychologist, and Simone Lahbib (Monarch of the Glen, Bad Girls) as Detective Inspector Alex Fielding. And on July 14, all four mysteries of the final season debut on DVD as Wire In The Blood: The Complete Sixth Season.

Whether he’s trying to crack a mystery involving internet chat rooms, a deadly hypnotist, DNA evidence or suicide cults, Dr. Tony Hill’s extraordinary understanding of a criminal’s mind has proven to be an asset to the police in northern England. Working alongside Detective Inspector Fielding, Hill is able to track down killers by actually visualizing the crimes. His ability to empathize with both victims and killers is something that drives his colleagues crazy, but his theories have time and again proven to be “dead-on.”

In Season Six’s “Unnatural Vices” Dr. Hill meets his most grisly challenge yet as he searches for a psychopathic serial murderer who is capturing, imprisoning, torturing and then eating his victims while they are still alive. “Falls in the Shadow” is loosely based on McDermid’s The Last Temptation in which another serial killer is targeting prostitutes and experimental psychologists in a very specific sequence. Other killers become the victims in “From the Defeated.” And, in the final episode of the series, Dr. Hill is brought in to uncover the identity of a killer who is murdering homeless men in a ritualistic fashion, only to be taken hostage by the same cannibalistic psychopath from “Unnatural Vices” who has escaped from the mental hospital.