This “best of” DVD from Paramount, reminds me of the many “best of” audio CDs that come out for many classic rock and jazz musicians. There’s never enough music on the disc, and there are so many great episodes of the iconic sci-fi TV series that could easily bear the title “best of”. I don’t understand why only four episodes were chosen to represent the entire show. 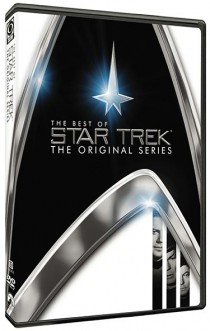 Nevertheless, the four episodes featured on the disc, can be considered some of the best of the show’s run, and are solid representations of the classic campy series, starting with The Trouble with Tribbles, the humorous episode in which the Enterprise is inundated by cute alien fur balls called tribbles. ‘Tribbles’ is considered one of the best Trek episodes of all time, and contains all the hallmarks of the show, including its penchant for going from extreme comical moments, to serious drama, on the fly. In the next episode, Amok Time, Captain Kirk and Spock face-off in a fight to the death as part of Spock’s odd cultural mating rituals, when the ship returns to Spock’s home-world for a brutal Vulcan marriage ceremony.

Next up is the time travel tale City on the Edge of Forever, which was written by noted science fiction author Harlan Ellison. The episode is set during Depression era New York, and features Kirk falling in love with a beautiful young Joan Collins. It soon comes to light that unless Collins’ character dies in a horrible traffic accident, America will never enter into World War II and the Nazis overrun the entire planet. This is by far, my favorite episode of the batch, as it deals with serious historical issues, and has the best mix of action, guest appearances, classic sets and story development.

The DVD is rounded out with Balance of Terror, which first introduced audiences to the evil Romulans, who use hostile pressure to take over a Federation outpost, forcing Captain Kirk and his crew to battle an invisible spaceship. There are some decent special effects for the time, and some great militaristic action scenes in this episode.

Unfortunately, there are no bonus features on the disc.